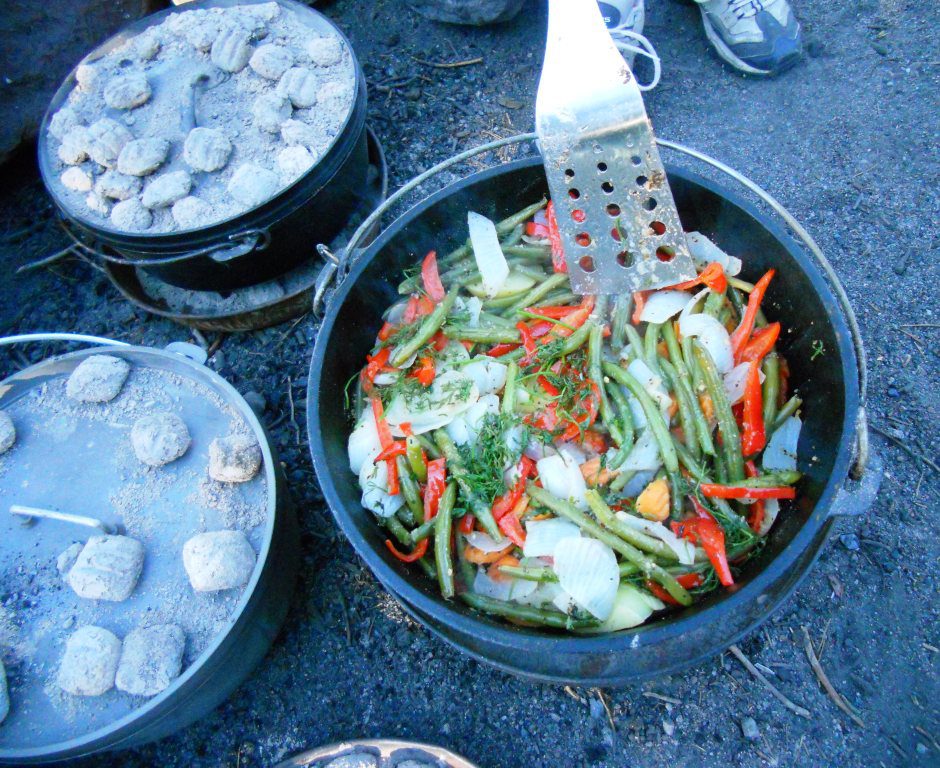 Taking care of your cast iron cookware is not difficult, but ruining the finish is easy.

Here are some things NOT to do.

Cast iron cookware has been around for hundreds of years, and there is no mystery to taking care of it.

Cast iron cookware was first used in China, a couple thousand years ago. 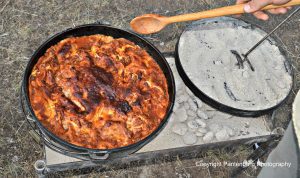 The Chinese invented casting iron. Essentially, they poured molten iron into a mold, and mixed it with a few other things to make it even sturdier. The Dutch oven became popular during the sixteenth Century in Europe, thanks to its ease of use and quick heating abilities. Many cast iron pots made it to the Americas following colonization.

Today, there is still no better implement for campfire or outdoor cooking. I’ve been using cast iron for decades, and have the skillet my grandmother got for a wedding gift in 1918. One of my cast iron cooking friends has the camp oven her grandmother brought west in 1845 on the Oregon Trail. On a recent camping trip, my wife Debbie cooked for several people with a 14-inch camp oven on a Camp Chef propane cooker.

FYI: A Dutch oven has no legs, and has a rounded top. These are generally used in the kitchen. The camp oven typically has three legs and a lipped top for easier cooking with lighted coals.

Here are eight things you shouldn’t do to cast iron cookware.

Clean it in a dishwasher: This may be the most common abuse. The prolonged hot water from the pressurized water jets, harsh detergents and long periods of steam inside the dishwasher, followed with high heat for drying, are virtually guaranteed to screw up the finish and seasoning.

Cleaning with steel wool or a Brillo pad: It’s always tempting to scrub away with a Brillo or steel wool pad. But don’t do it! If you rub the cast iron down too hard it will have to be re-seasoned. Scrape the pan with a plastic spatula or scraper designed for that purpose.

Improper seasoning: Most new cast iron comes pre-seasoned, but that doesn’t mean they are ready to be cooked with right out of the box. The pre-seasoning is a factory coating that tends to be rather porous, and the first few things cooked in one of these pre-seasoned items may stick. Many experienced DO cooks season pre-seasoned pieces. (Check out the videos to learn how to season cast iron.)

Once the cast iron is seasoned, the first things cooked in it should be something like frying bacon or deep fat frying fish or chicken. The camp and Dutch ovens work very well on a propane burner, and the tall sides reduce spattering.

Transporting: Tossing the oven into the trunk or pickup bed and taking off may cause the piece to bounce around and get damaged. There are commercial cases available that work very well. I like to use square plastic milk cases. A 12-inch oven will fit perfectly, and the cases can be stacked.

Put a large metal dog food pan on the bottom to keep the camp oven’s legs from poking through. These pans are  invaluable for placing lighted coals under the oven.

Improper storage: My winter home in Mississippi is hot and humid, and this is a perfect environmental combination for causing rust. My cast iron is mostly stored in the garage, and the temperatures can get really hot. I’m regularly checking the iron for rust or corrosion. If possible, keep the cast iron at a constant room temperature in the house.

If the oven must be stored with the lid on, fold a paper towel and insert it between the lid and the oven. This will allow air to circulate, and reduce the chance of moisture accumulating.

Soak overnight in soapy water: Cast iron can be washed with a little bit of soap and water, but don’t let it soak long. After washing and rinsing with plain water, let the cast iron sit on a hot burner for a few minutes after it is towel dried. Any amount of water left in the pan can cause a rust spot.

Cooking with tomatoes: The acid in tomatoes, or other acidic foods, can eat away at the seasoning and make it rough. Get a stainless steel pot for cooking acidic foods.

That said, I always cook chili in a cast iron Dutch oven and there is no problem. That’s because my cast iron is well-seasoned, and I won’t cook a steady stream of acidic foods in any one of them.

Boiling water: Same thing – the hot water can remove the seasoning. Boil water in the pot used for cooking tomatoes!

Wipe down with oil after using: A quick wipe down with cooking oil on a paper towel after the piece is cleaned and dried will stop rust from forming. You don’t need a lot of oil – just enough to make the iron look shiny.

Does cleaning and maintaining cast iron seem complicated? It isn’t. Just use some common sense. A well-used pot never rusts, so the more you use your cast iron, the better it will get.