Five things to know about hunting and eating snakes 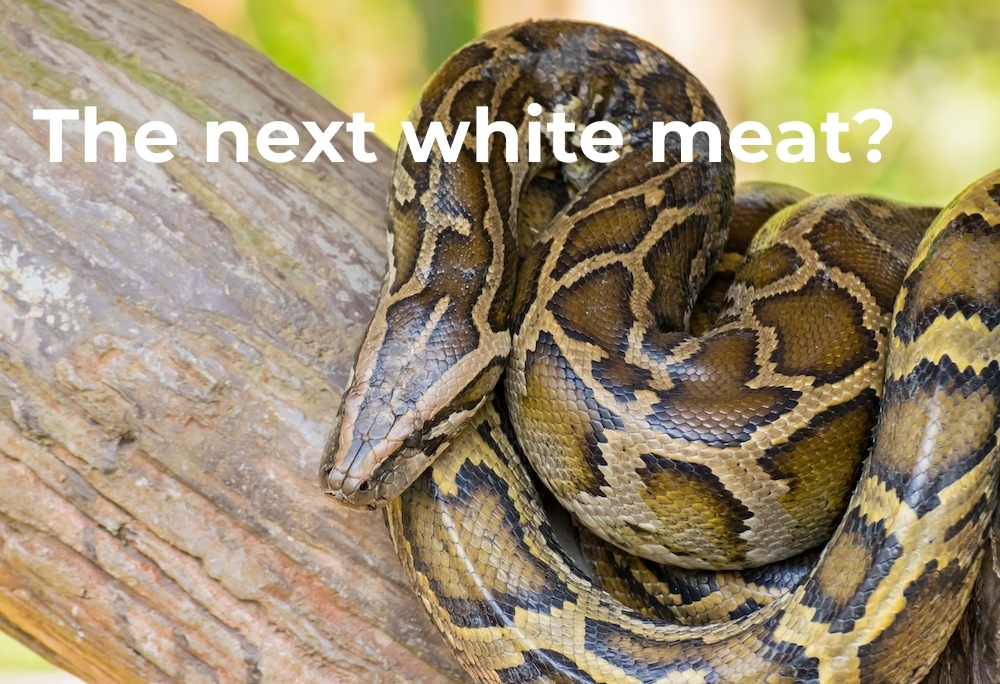 Editor’s Note: One way to deal with invasive species is to make them profitable to harvest. If a market for python meat and hides develops, it could help solve the Florida Everglades snake problem.

If you live in the American Southwest, you may have seen snake meat on a restaurant menu.  Snakes are not only edible, they’re also delicious. Some snakes are even considered delicacies in other parts of the world.

You don’t need to go to an expensive restaurant or a foreign country to enjoy a dish of snake meat. North America is full of potential dinners slithering on the ground, in rivers, or in trees. 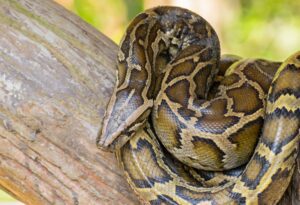 Burmese pythons are devastating the Everglades ecosystem. They need to be removed – beat ’em by eating them!

In the Florida Everglades, procuring these potential dinners will also help save the entire ecosystem. Floridians are encouraged to hunt and kill invasive Burmese pythons, the massive snakes that have threatened the Everglades for 20 years. Luckily, becoming an invasive species eliminator is easier than it sounds – and can be pretty tasty too!

Here are five things you need to know before adding snake meat to your diet.

Snake meat is (mostly) safe to eat. When people talk about toxic snakes, they’re talking about a venomous animal, not a poisonous one. This distinction can sound pedantic and technical, but it’s crucial to understand if you’re considering hunting and eating an animal.

Venomous animals inject a toxin into another animal; most people think of snake fangs, but a much more commonplace example would be bee stingers. Poisonous animals release a toxin in anything that eats them; think of pufferfish or dart frogs. Since snakes are venomous, not poisonous, they are safe to eat, although hunting venomous snakes obviously carries greater risk.

With pythons, there is an additional concern about mercury poisoning. Because pythons sit at the top of their food chain, the mercury in the ecosystem accumulates and becomes concentrated in their bodies; eating one of these snakes could cause mercury poisoning.

The state of Florida is currently studying the rates and levels of mercury toxicity in the Everglades’ Burmese pythons. For now, if you plan on catching and eating any Florida pythons, buy your own mercury testing kit and check the meat before preparing it.

The laws about catching, killing, and trading snakes vary by state and can be quite strict.

There are more than 100 different species of snake in the US, and more than 50 different governments making decisions about who can hunt which snakes and how. Some states, like California, allow snake hunting without a license year-round; others, like Arkansas, don’t allow it at all.

There are also federal regulations prohibiting all hunting of certain endangered species. Several snake species in Florida are either on or being considered for these protections. However, because Burmese pythons are a hugely destructive invasive species, there are no limits or restrictions on hunting them; in fact, the state encourages it.

Being aware of your surroundings and having the right equipment is crucial to help you avoid snakebites while hunting.

Even non-venomous snakes, including pythons, can inflict painful and damaging bites on hikers and hunters. Knowledge and awareness are the best preventive tools any adventurer can have. Knowing which snakes you might encounter and where they’re likely to hide will help you maintain vigilance and avoid surprising a snake, the second most common cause of bites.

The most common cause of bites is trying to catch and/or pick up snakes, which is why hunters need to be extra vigilant. Wearing tall, heavy boots, thick gloves, long pants, and long sleeves will all help reduce the risk that any potential strikes administer a high dose of venom.

If you are bitten, remaining calm and acting quickly are your two most critical tools. A close third is a cell phone or car keys. Ignore any old folk wisdom about sucking out venom, icing the wound, or applying a tourniquet; none of these “treatments” work and are instead likely to make the damage worse.

Pythons can grow to be 20+ feet long.

Don’t panic, either; increasing your heart rate will only speed up the venom’s spread through your body. Remove any tight clothing or jewelry from around the wound, and try to keep it at heart level. Then, call for help or walk to your car and drive to the hospital. The quicker you get to antivenom and medical attention, the less agonizing your experience will be.

Decapitation is the quickest and safest way to kill most snakes. In theory, you could shoot a snake, but it would probably be (literally) overkill, and it will also make the body, or what’s left of it, much harder to clean and eat.

The exception to this might be particularly large Burmese pythons – remember, these snakes can grow up to 20 feet long – but keep in mind that if you wound 20 feet of pure muscle with some very sharp teeth at the end, you’ll end up with 20 very angry, unpredictable feet of pure muscle. Besides, it’s illegal to hunt pythons with firearms in many places in Florida.

With guns out of the question, your best option for killing a snake is immobilizing its head and then quickly decapitating it. Probably the easiest way to do this is with a long, Y-shaped stick: Use the Y-shaped end to pin a snake just behind its head, then decapitate it as quickly as possible. This is humane for the snake and also minimizes (but doesn’t eliminate) your risk of being bitten.

For pythons, because of their size, these methods are slightly different. While you can stun the snake and then decapitate it, Florida Fish and Wildlife encourages using a captive bolt gun or small firearm, and aiming at the center of an imaginary X drawn across the top of the snake’s head. The key is to destroy the snake’s brain as quickly as possible, both to be humane to the snake and to protect yourself from having to deal with an angry, wounded snake.

Snakes are very easy to clean and prepare for cooking, and snake meat can be roasted, dried, boiled, fried, or even cooked in a pressure cooker.

Snakes really only have three internal organs, a heart, a brain, and a tube that handles just about everything else. That means gutting a snake is fairly straightforward; just remove the tube, being careful not to tear or puncture it. Snakes do have a lot of bones, though; deboning a snake is similar to deboning a fish. Once you’ve removed the skin, organs, and bones, you’re ready to cook!

Be careful not to undercook snake meat, and never eat it raw. Like all wild-caught meat, it might have parasites, and reptiles often carry salmonella.

As for recipes, there are dozens of ways to cook snake meat; if you’re camping, you can try roasting it on an open fire or frying it in oil. At home, it can be cooked in a pressure cooker or even jerked. Just remember that snake meat has basically no fat on it.

Though it might seem dangerous or crazy to some people, hunting and eating snakes is easier than it seems and provides an excellent source of tasty protein.

For Floridians, especially, hunting and eating Burmese pythons is almost a civic duty, especially for those who value the incredible natural biodiversity of the Everglades. This includes all the snakes that are supposed to live there.