Should you include fishing gear in a pocket survival kit? 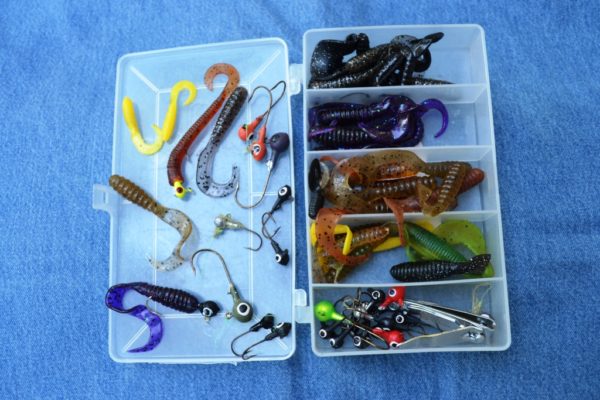 Check out commercial personal survival kits and you’ll notice many of them include hooks, sinkers and fishing line.

I don’t include sport fishing gear in pocket survival kits, and don’t see much value in fishing equipment as an emergency survival tool. Here’s why.

My friend, Phil Brummett, was showing off. That’s what I told him.

Phil, several other adults and I were accompanying a group of Boy Scouts on a “Ten Essentials” campout. The idea was to survive the night with only the gear you’d carry on a dayhike. Along with the rest of his Ten Essentials, Phil took a reel with flyline, several flies and some paperclips.

Phil whittled a rod from a six-foot willow switch. He made line eyelets out of the paperclips,  and duct taped the eyelets and reel to the rod. He could easily cast 40 feet with it. His son, Jesse, used the setup to catch a nice rainbow trout of a small creek. 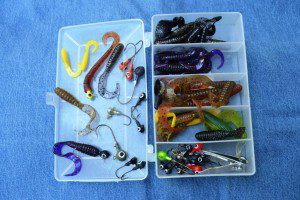 This pocket-sized box holds all the lures I need for a day of smallmouth bass fishing on Oregon’s John Day River. This collection would be carried in addition to my pocket kit. (Pantenburg photos)

But Phil is not your average outdoorsman.  A professional fly fishing guide in Central Oregon, and the merit badge counselor for the scout flyfishing merit badge, Phil is on the water well over 200 days a year, under all sorts of weather conditions. IMO, Phil can catch fish any where, under any conditions with sport fishing gear.

But that doesn’t mean you or I could have the same kind of  “luck.” I’d guess the average, untrained person would not be able to catch a fish with Phil’s makeshift gear.

But hooks, a piece of line and some sinkers seem to be standard in many pocket survival kits. I’m not sure why that is, other than customers seem to expect them to be included.

From the manufacturer’s viewpoint, a hook line and sinker are three pieces of cheap gear they can include in the kit to boost the item count with little expense. They take up space, and pad the contents list.

Here are some thoughts about pocket survival kits, and why you don’t need fishing stuff in yours.

A pocket kit should be kept with you at all times as an addendum to a full-blown Ten Essentials pack. Statistics show that most lost people are found within 24 hours of being reported missing, provided they stay put. Play your cards right, and carry food along as part of your essentials, and foraging won’t be necessary. Your pocket kit must be, above all, light and convenient to carry.

This survival kit weighs about as much as your IPod. Carry it in a waterproof container for added security. Don’t waste space!

Survival fishing isn’t fair play sport fishing.  If you desperately need to catch fish to survive during a long term survival situation, sportsmanship goes out the window. There are many effective, though highly illegal, ways to catch mass quantities of fish.

I don’t encourage doing anything illegal, and won’t explain unethical ways to gather fish. But check out your state’s fishing regulations. Any illegal activity or technique is probably barred because it works too well!

Return on time investment: In a survival situation, your time and energy are finite resources that must be hoarded and used wisely. Before you spend time fishing, you need to have a shelter finished, firewood gathered, signaling devices set up and a survival plan established. Don’t fritter your time and energy away fishing until all these necessities are in place.

Food value: This is another ROI that needs to be considered. Check out diet plans, and you’ll probably find fish listed as a low calorie food recommendation. Your calories intake will determine your energy level. Your energy will determine if you stay warm and active enough to assist in your rescue.

So do the math: If there is the potential to catch a trout that supplies 100 calories, and you use more than that to stay warm, and burn up 200 calories in the exertion, you’ll soon have an energy deficit.

Priorities: Immediately upon realizing you are in a survival situation, sit down and come up with a plan for surviving and what your next action will be. Use the STOP exercise. Don’t be distracted by an activity of lesser importance such as fishing.

Chances are, if I’m backpacking in an area with the potential for catching fish, I’ll have along a lightweight rod, reel and the appropriate lures. But when it comes to your pocket gear, take only what you need. Otherwise, the kit gets heavy and bulky, and left in the vehicle.