Before you buy any knife: Check out what kind of steel is in the blade 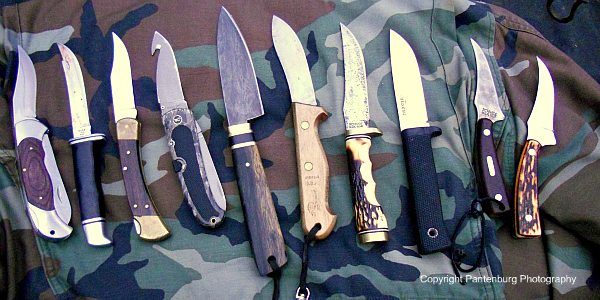 A well-designed or pretty knife with inferior blade steel is a waste of money. Worse, it could break or fail when you need it most. Before you buy anything, know what steel is in the blade.

Here are some knife steels I have used and trust.

So what do you need in a survival/hunting/preparedness knife blade?

A good blade will stay sharp, but be easy to resharpen. It will hold its edge throughout a variety of tasks it may be called upon to do, ranging from cutting rope, whittling sticks, cleaning fish or small game etc. During rough tasks, it won’t break, provided reasonable care it taken.

Long before I saw the steel characteristics list below, I had opinions. Based on field use and experience I gravitated toward certain knife brands. There are many excellent knives on the market, and I can’t test them all. But these blades have worked well for me.

Bark River Knives: I discovered Bark River, and bought my first,  a Fox River to test. I beat the crap out of it, using it for a multitude of tasks that included whittling, wood carving, meat cutting, kitchen use etc. I also loaned it out to some Boy Scouts learning firemaking.

In the end, I had to deliberately dull the knife to check out how hard it was to re-sharpen it. The CPM3V  steel in it worked really well for what I use knives for. Since that initial wring-out, I also tested the Bird and Trout, Canadian, and Aurora, among others. (Check out our other Bark River video reviews.)

Another great steel is A-2. I used several Bark Rivers on a recent deer hunt, and they never seemed to need sharpening, no matter how much work they did. The Sahara, Kalahari and Sportsman all performed magnificently. 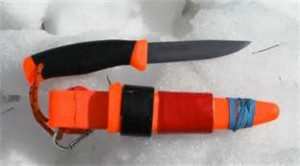 This Mora is an incredibly useful knife in a multitude of tasks. (Pantenburg photo)

Mora: This small, inexpensive knife is a workhorse. One of my hunting buddies got a Mora 840 and started using it. He has other, excellent hunting knives, but so far he has field dressed three deer, an elk and a  caribou  with his Mora.  He also used it on a moose in British Columbia.

My buddy claims he doesn’t have to re-sharpen the Mora when working on a carcass. Many Mora-brand blades are  UHB-20C carbon steel.

PUMA: One of my favorite small game knives is the PUMA stockman pocket knife. The knife carries easily in a pocket while bird or waterfowl hunting, and the blade designs are just what you need for field dressing small animals. Another nice aspect is that with three blades, you can switch out as soon as one blade starts to get dull. 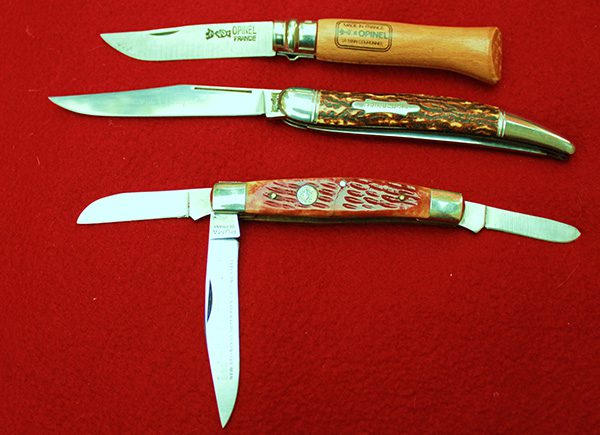 Here are three of my favorite small games knives, From top: Opinel, a vintage Imperial fish knife, and the Puma stockman. (Pantenburg photo)

The steel used to make PUMA German knives, according to the company brochure, is the “best knife steel in the world.” The proper amount of carbon makes a knife easy to sharpen and hold a cutting edge, but it also allows a knife to rust more easily unless other trace elements are added to protect oxidation.

In the  440C steel, about 1% carbon is added for a great edge and about 17% chromium to maintain the temper but inhibit rust, according to PUMA. About 0.35% Silicon is also added to the base alloy to deoxidize the steel and further stabilize the blade. Additionally, other trace elements such as manganese, phosphorus, sulfur, and molybdenum are added to increase the ability of the steel to form an edge and hold it once formed. These trace elements cause the molecules to align more evenly when cooling to give better structural strength and consistency. 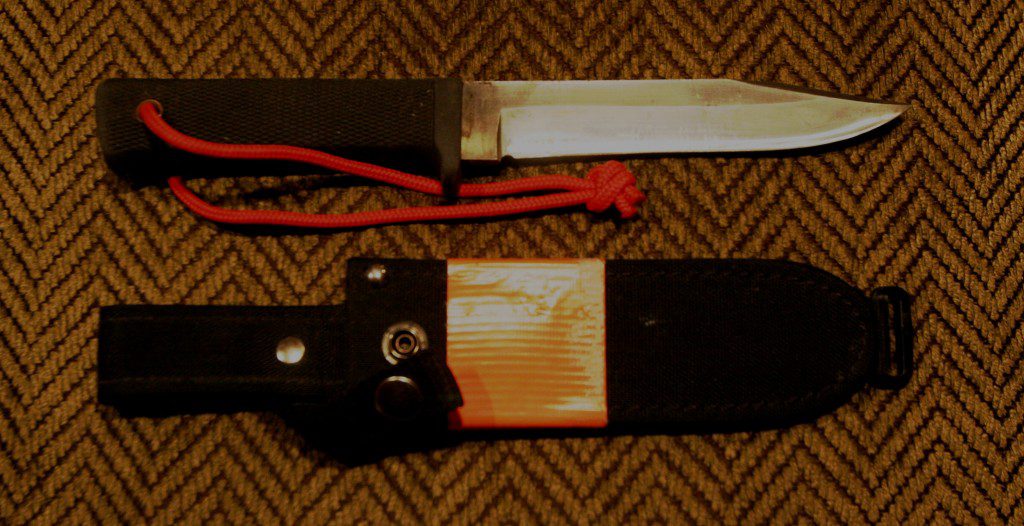 This Cold Steel SRK has served me well for more than 20 years. (Pantenburg photo)

Cold Steel: My SRK shows wear, but it is still going strong after more than 20 years of constant use. At one point, I field dressed three deer without resharpening it.

I also really like the Master Hunter. A couple years ago, I deliberately used it for all my cutting tasks on an elk hunt. For the finale, the Master Hunter was used to skin a cow elk. During this hunt, the knife was used extensively, and didn’t need re-sharpening.

My old SRK has COLD STEEL CARBON V MADE IN USA stamped on the blade, but today’s SRK includes steel of VG-1 San Mai IIIAUS 8A. 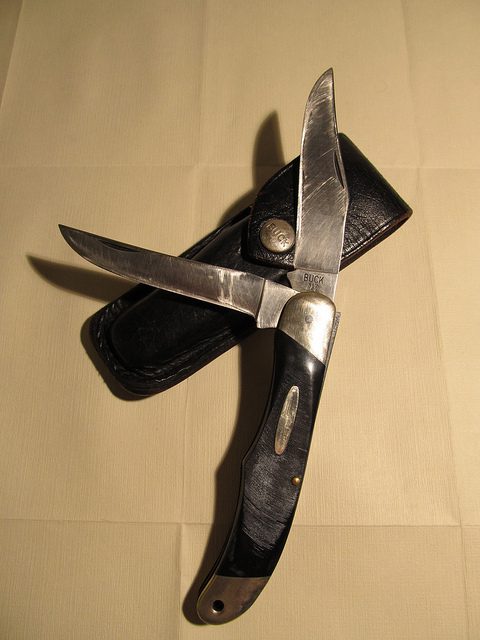 I bought my Buck folder in 1976, and used it for years before replacing it with a Cold Steel SRK. (thefloridasteam
punker.blogspot.com photo)

Buck: I bought my first Buck folder new for $25 on August 31, 1976, at the Ace Hardware Store in Lovell, Wyoming. I used it extensively until I opted for a rigid blade and bought my SRK in 1991. That model 317 Buck was my everyday carry knife on my six-month, end-to-end Mississippi River canoe voyage. The blades held a great edge, despite being used for virtually everything a canoe knife can be used for.

Buck’s standard blade material, according to the Buck Company, is 420HC because it combines “excellent wear resistance of high carbon alloys with the corrosion resistance of chromium stainless steels.” An exclusive heat-treat process for superior corrosion resistance, the company claims, creates “excellent tensile strength, hardness and wear resistance.” 420HC Steel is a High Carbon (HC) version of standard 420 martensitic stainless steels, Buck says, which means they can be can be hardened to a Rockwell hardness of Rc 5.

Here is “the tip of the iceberg” of knife steels, posted by Steven on Linked In.

D-2: Carbon 1.5%; Molybdenum 1%; Chromium 12%Vanadium 1%. A stain-resistant, but not quite stainless, tool steel, used in knife making by Bob Dozier, Benchmade, and Ka-Bar knives. Has good edge retention, but needs to be cleaned frequently so it does not rust.
Damascus Steel: A legendary steel used by Muslim people against Europeans during the Crusades. It was said to be much stronger, flexible, and sharper than European steel. The process for making it was lost. Many people have experimented with recreating Damascus steel, notably Bill Moran.

M-2: Carbon 0.85%; Tungsten 6.35%; Molybdenum 5.0%; Chromium 4.0%; Vanadium 2%. A good steel used in kitchen knives and folding knives. A high-speed steel, meaning it is resistant to high temperatures and will maintain its edge even when extremely hot.

Stainless steel: A steel that has a high chromium content to prevent rust. Because knives need high carbon to remain sharp, a stainless steel for knives is just rust resistant, not completely rust proof.

Titanium: A lightweight, hard metal used for knife handles and parts. It does not have good edge retention, so it does not typically make good blades. Because of its resilience against harsh elements, it is used frequently for diving knives.