Video: Save big bucks with these laundry and dishwasher soap recipes 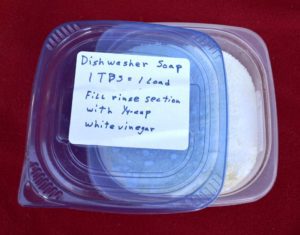 My personal rebellion against high-priced laundry soap has spread to dishwashers.

Check out this simple, easy recipe that will save you money! (This post was originally published in Survival Common Sense in 2013.)

I thought I was the only one rebelling against the high cost of laundry soap until I posted a do-it-yourself frontloader laundry soap recipe. (Check out the recipe here.) 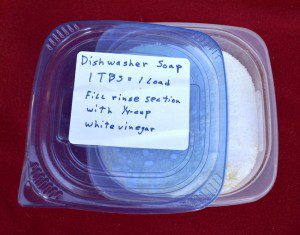 This do-it-yourself dishwasher soap is inexpensive, easy to make and very effective. You can make it for pennies! (Pantenburg photo)

Reader response was huge! I gave some laundry soap to the neighbors, and they joined the fan club.Then I dropped off three quarts at Bend’s Westside Village Magnet School (where all my kids started school). The idea is that the kids could make soap as a school fundraiser.

Then my wife, generally not the biggest fan of my penny-pinching, Depression-era mentality and incessant experimenting, published this Facebook post:

“OK, my wacky husband Leon Pantenburg is a hero today. He converted our household to both home made laundry detergent AND dishwasher detergent. And, they both work great. Super cheap…only a few pennies per load. All made from natural stuff you buy at the grocery or Wal-mart. It’s great for the environment and first dish load today is sparkling. (I was skeptical at first – well actually deriding him for his tomfoolery). Now I’m impressed. Probably saving $45/month minimum.”

That latter savings figure is actually pretty close – I was surprised, too!  With my daughter in cross-country track, hunting season, and fall camping trips coming up, we go through the laundry detergent! In some cases, making something yourself means you’ll need to take out business loans and empty your bank accounts, but this truly was an inexpensive and money saving endeavor.

Being a news guy,  I also experimented with a dishwasher soap recipes. This recipe works really, really well and  comes from The Offbeat Home website.

Add one to two tablespoons of this mixture to your dishwasher detergent compartment along with three drops of dishwashing liquid. Do not use more than three drops. The dishwasher will overflow if you use too much dish soap!

To make your glassware sparkle, add 1/4 cup of vinegar in the rinse.

Because of this latest recipe, my household is virtually off of commercial soaps. (Our handsoap and my shampoo comes from Heart of Iowa Soapworks.) In addition to substantial savings, I also like knowing what is in the soap.

But the payoff, though, is walking down the laundry aisle at the local supermarket, and seeing the prices.

Visit the Offbeat Home website to view other money-saving tips!