Ten skills that helped my family survive the Great Depression 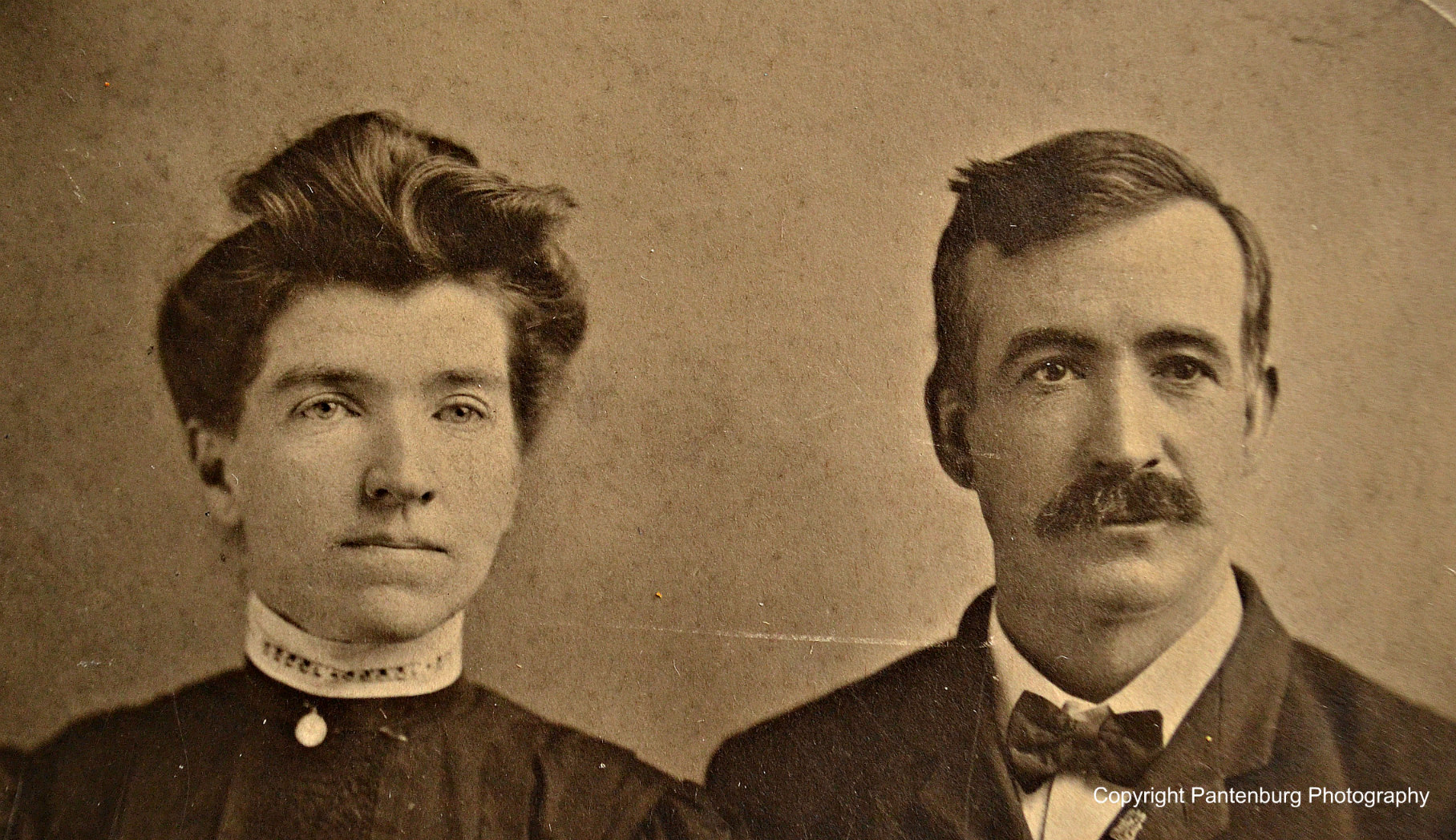 What lessons from the Great Depression might apply today?

Here’s how my family got by.

The stock market crashed in 1929, the economy tanked, farm prices dropped and my grandfather, Peter Pantenburg, lost the family farm in central Iowa. My people have been in that area since my great-great-grandfather, James Hallowell got a land grant after the Civil War and  homesteaded in the late 1860s. My great-grandpa, Charles Hallowell,  plowed the prairie for the first time in the 1870s with a John Deere breaking plow 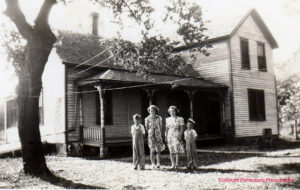 Leo Wirth moved his family to Wesley, Iowa to find work. Here’s some of the kids, in – I think – the mid 1930s: Vincent, Alina, my mom, Mary and Eldon.

My dad’s family went from being prosperous farmers to homeless in a matter of months.

My mom’s family had a similar story. Grandpa Leo Wirth also lost a farm, and he had a large family to feed.

Both families were destitute, but they weathered the storm and stayed intact. There are a lot of lessons learned about coping with economic disaster.

To put this in context: By 1930, according to history.com four million Americans looking for work could not find it; that number had risen to six million in 1931. Meanwhile, the country’s industrial production had dropped by half.

My grandparents, Peter and Harriet Pantenburg on their wedding day in June, 1917.

By 1933, when the Great Depression reached its nadir, according to history.com, some 13 to 15 million Americans were unemployed and nearly half of the country’s banks had failed.

The United States didn’t come out of the depression until 1939, at the beginning of World War II.

Despite the hard times, both families stayed intact. All their children turned out to be upstanding, successful people. 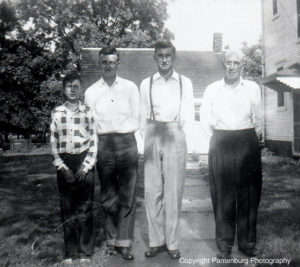 My uncles Eldon, Vincent and Fredrick and Grandfather Leo Wirth, probably in the late 1930s in Wesley, Iowa.

Here’s some of the lessons learned.

Never give up: Leo moved his family to Wesley, Iowa, because he found work managing a gas station/garage at a Standard Station. Pete and Leo took whatever work they could find and did any jobs that were available. Neither sat around waiting for someone to help them out. Nobody expected any government help, and both men would have felt it demeaning to take assistance from anywhere.

Figure out your resources, and come up with a plan:  Even though it was a good crop, Pete’s corn was not worth harvesting in 1930 with the low prices. So the family burned corn for heat one winter.

Some of the displaced farmers headed west, or to other areas to look for work. Others tried to stay in place. Take an inventory of your resources and assets, and use that list to decide what to do next.

Subsistence hunting and fishing: My dad was 11 in 1929. He was too small to be much help farming, but he was an excellent small game hunter. Dad hunted all the time, and frequently, the rabbits and squirrels he killed became the main course for the evening meal.

His marksmanship got really good. Years later in the Army, that skill got Dad a job training troops and teaching rifle and pistol. Dad’s primary hunting firearm was a single shot .22 rifle. He used .22 shorts, because of the low price and noise, and he only shot once before moving along. (It’s difficult to locate a single shot by sound.) Still, he got caught poaching once. 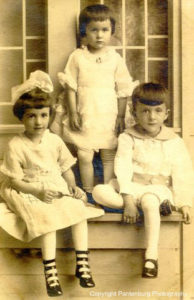 My dad and his sisters, Agatha (left) and Edna, sometime in the 1920s. 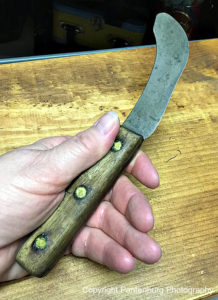 But don’t depend on hunting or fishing. Hunting and foraging can supplement the food supply, but heading for the hills and “living off the land” won’t work. Have other ideas and plans to put food on the table during emergencies.

Have a skill or supplemental job: All farmers, it seemed, had some sort of side occupation. Leo was a butcher, and he would travel to farms to process cattle and hogs. He frequently got paid in meat. (Leo died when I was seven or eight, but I remember him skinning a pig and tending his bees.)

Charles Hallowell and his daughter, Alice Johnson, used their musical skills to survive. Charles played the violin at bars, dances, parties and other social events. Alice accompanied him on the piano, or played another violin.

They made enough to keep ends meeting, and to take in Pete’s family temporarily. ( It’s in the DNA – today, I play Charles’ fiddle in an old time string band. We do some of the same tunes Charles did. Check out how grandpa’s fiddle sounds on “Over the Waterfall.”)

Everybody, including the kids and old folks, had a job they could do based on their abilities. These tasks could be anything, from gathering eggs, to snapping beans, to helping with the harvest to working in the garden. Every little bit helped. 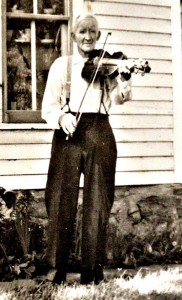 My great-grandfather, Charles Hallowell, sometime in the 1940s.

Stick together: Pete’s family moved to another farm north of Ames, and got a new start. I grew up on that farm, and my dad bought it in the 1960s. (I hunted the same hills and timber he used to hunt as a kid, but I never had the pressure to be successful!)

Other neighbors were not so fortunate, and many of them had to hit the road (Think “Grapes of Wrath”). Our next door neighbor, Jo Stahlman, was born in Foley, Alabama, when her family moved south to find work.

Make do: Fix, repair, recycle and reuse. Clothing was patched, handed down and used up. When it finally reached the rag stage, it might be made into a quilt.

That went for just about everything. Money was scarce, and fixing or mending something didn’t cost anything.

Garden: While millions of Americans went hungry, my relatives gardened like they always did. Every farm had a large plot, and many families were largely fed off the produce. Fruit orchards and berry patches were common.

There was virtually no market for livestock, but farmers could and did raise animals for their own tables. As far as I know, places like Iowa and other midwest states, which didn’t have the severe droughts of the dust bowl areas, fared better than many areas.

Raise chickens and rabbits: Farms back then were more diversified, with a variety of food raising activities. Every farm had a flock of chickens for the eggs and meat.

Rabbit meat is one of the most nutritious meats available, according to Rise and Shine Rabbitry, and rabbits can produce six pounds of meat on the same feed and water as it takes a cow to produce one pound of meat. 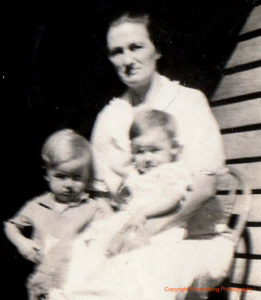 My grandmother Sophie Wirth, with my Aunt Irene and Uncle Eldon, probably in the middle 1930s.

Both of these animals can be raised in small spaces and are productive and prolific.

Preserve food: Every farm wife knew how to can and preserve vegetables, and every farmer had a pantry. My relatives, being of mostly German extract, made lots of sauerkraut, and pickled many other vegetables.

Canned and smoked meats were also important. Just about every farm had a smoke house, where meat was preserved by smoking. This included hams, of course, but bacon, sausage and other smoked meats last a long time, and could get you through the winter.

This probably explains why bratwurst and sauerkraut is one of my favorite comfort foods. That’s also in my DNA.

Build a root cellar. These were the family’s food insurance policy. They were generally an area under the house, like a basement, where canned foods could be stored. The temperature, being underground, was generally pretty consistent, and it allowed for long term storage of root vegetables. Hence the name.

The root cellar was an essential way to keep carrots, turnips, beets, parsnips, potatoes, and other root vegetables fresh through the winter months. According to the Old Farmer’s Almanac, to work properly, a root cellar must be able to hold a temperature of 32º to  40º F and have a humidity level of 85 to 95 percent. Ground temperature stabilizes at 10 feet deep, according to the almanac.

“He (Leo) was known for supporting siblings in anyway he could,” Irene told my cousin Lisa Faust Swenson. “On weekends, anywhere from one family, to all his siblings’ families, would show up for dinner. Grandma would just keep taking food from the root cellar to make sure all were fed.”

It took World War II to bring the country out of the Great Depression. There are still arguments what caused it, and who is responsible. That discussion can take place somewhere else.

We’ve all heard that cliche’ about “Those who don’t learn from the lessons of the past are doomed to repeat them.” And I think the lessons learned from my families’ survival of the depression are valid today.

Here’s the bottom line:  You have to be part of a tribe, family or larger group that cares about the individual. Stick together. Learn how to produce, preserve and store food.  Learn job skills and how to get by.

And maybe the most important lesson: Never give up!

(Note to all my relatives: I did the best I could with what there was to work with. I had to guess on the dates of  some of the photos. I remembered stories I’d heard, and in particular, loved talking with Great Aunt Alice about Dad’s side of  family history.  If you’ve heard other stories on this topic, or if I got something wrong, let me know!) 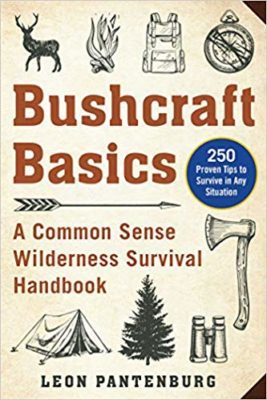