Video: Fix your Mora clipper sheath for safety and security 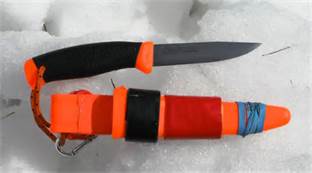 All it takes is an emergency to show how well your survival gear really works! 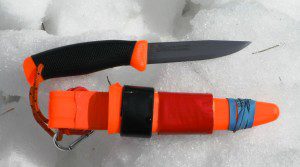 This Mora Clipper sheath has been modified so it will swing freely on a belt, secure the knife and provide a convenient place to carry duct tape! (Pantenburg photo)

The Clarno Rapids on the John Day River in Central Oregon rapids last about three-quarters of a mile, and we’d managed to hit a rock cross-ways right at the head. My wife, Debbie, paddling in front, and I were thrown out of the canoe. Her head bobbed above the rapids as she navigated the whitewater. Several minutes later, I pulled myself out in the slack waters of an eddy. From downriver, Debbie waved to show she was OK.

Everything we had, all of our fishing, camping and survival gear, was headed downstream toward the Columbia River.

The other members of our float party were soon at the scene. But if we had been alone, here’s the survival tools we had left:  I didn’t lose my hat, glasses or the GPS in my pocket. A whistle was attached to my life jacket. I had charcloth in a plastic bag, wallet-sized fire starter and my key ring survival gear. We had everything we needed to start a fire and signal for help.

But the Mora knife was gone from its sheath on my belt, and the butane lighter in my left front pants pocket had disappeared.  Everything attached, we kept. Everything loose, we lost. (And I hope whoever found my fishing rods, and that tackle box full of Rapalas, enjoys them!)

Losing that Mora started me thinking about ways to improve on the sheath. I had always been unhappy with the standard plastic sheath most Mora-style knives come with. I proved you can lose a knife out of one, and believe the unmodified sheaths are potentially very dangerous. 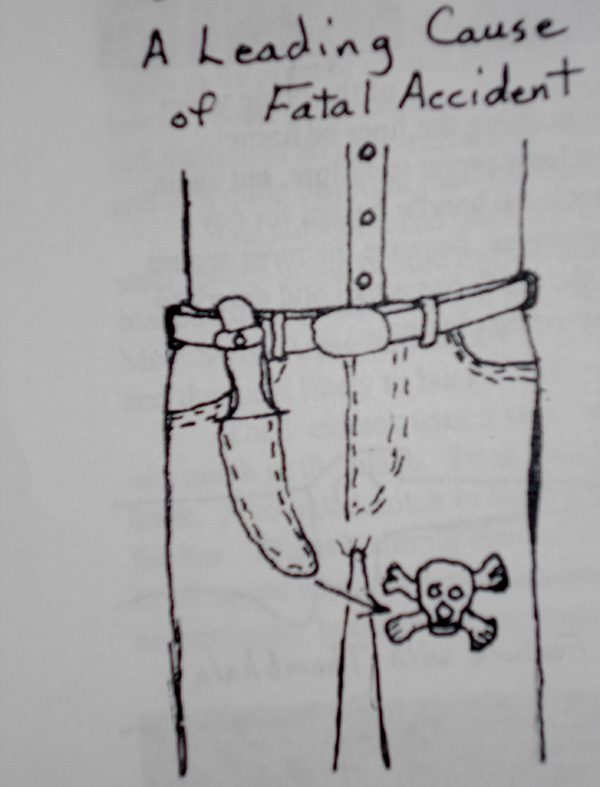 Carrying a rigid sheath in the wrong position of the belt can be fatal! (C.T. Fischer illustration)

The primary way sheaths kill their owners is by allowing the knife to penetrate through, and cut the femoral artery or other main blood vessel, Fischer writes. For this reason, vertical sheaths should not be worn on the belt forward of the side seam, he advises, and keep them on the side or to the rear.

“I’m sure many hunters have worn their knives in front as the best way to keep them from bumping against the rifle,” he writes. “But many have also paid the price in blood!”

The solution to the Mora sheath problem, I reasoned, would be to attach the sheath securely to the belt, while allowing it  to swing freely. That way, the sheath would swing out of the way before it could damage or injure someone.

I also wanted a way to securely attach the knife to the sheath, so it wouldn’t  be lost. After some experimenting, I found a solution to the clipper sheath safety issue.

Here is what you do:

Most Mora-style  knives have a haft that goes three-quarters of the way through the handle, so it is easy to drill a hole at the end of the handle. I did that, and ran a piece of paracord through the hole to tie the knife to the sheath.

Once the hole is drilled, all you need is a D ring or some paracord, a belt clip or small caribineer, duct tape and a narrow piece of leather or webbing. Combine these to modify your Mora sheath into a safe, secure scabbard that swings easily out of the way.