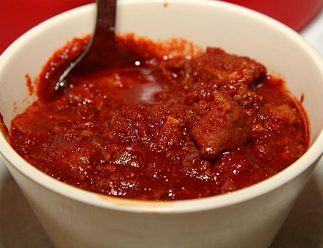 Few dishes evoke the passion of chili, and you probably either love it, or don’t care for it at all.

I love this recipe, and you will too!

The freezing wind whipped around the pickup tailgate, and it was snowing sideways. It was the worst possible conditions for a chili contest, but the Boy Scouts Fremont District usually has a cookoff at the annual Freezeree Winter campout in January. 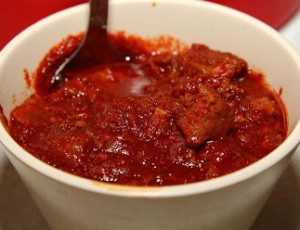 One of the best things about chili is the variety of ingredients that can be used.

I was elected to represent the Troop 18 scoutmasters. While the batch was simmering, the snowfall increased to the point where we had to rig up a blue tarp to keep the snow off.  But everything came out well, and I ended up with bragging rights.

In chili competitions, as in many other obsessions, environmental challenges are just part of the journey. And a blizzard at the cookoff just makes the story better.  Few dishes evoke the passion of chili, and you probably either love it, or don’t care for it at all.

There are probably as many chili recipes as there are chili cooks and an enthusiast will probably have strong opinions about how and what it is made of. Then, you have to decide which camp you’re in: do you prefer your chili beanless or with beans; spicy or mild? Should it be soupy or so thick you can eat it with a fork?

What is the best meat to use: Beef, venison, buffalo or some other type of wild game? And what is the best utensil to cook it in? Cast iron seems to be the standard, but enthusiasts usually have a favorite pot. The official state dish of Texas, the origins of the spicy meat stew are obscure. The only thing certain is that it didn’t come from Mexico.

San Antonio writer Charles Ramsdell claims: “Chili, as we know it in the U.S., cannot be found in Mexico today except in a few tourist spots. If chili had come from Mexico, it would still be there. For Mexicans, especially those of Indian ancestry, do not change their culinary customs from one generation, or even from one century, to another.”

There are many legends and stories about where chili originated and it is generally thought, by most historians, that the earliest versions were made by the very poorest people. The first chili mix was concocted around 1850 by Texan adventurers and cowboys, according to the International Chili Society, as a staple for hard times. The cattle drovers and trail hands popularized the dish throughout the southwest.

Legend has it, that one famous range cook made chili along all the great cattle trails of Texas. He collected wild oregano, chile peppers, wild garlic and onions and mixed it with whatever meat he had at hand to feed the cowboys. To make sure he always had a supply of native spices, he planted gardens in the path ofcow drives. These were put in the middle of mesquite thickets to protect them from the cattle.

There was another group of Texans known as “Lavanderas,” or “Washerwoman,” that followed around the 19th-century armies of Texas making a stew of goat meat or venison, wild marjoram and chile peppers.    Today, chili is served all over the world in various incarnations, and it has never been more popular. The annual International Chili Society’s World Championship Chili Cookoff in California pulls in competitors from all over the world, and draws more than 30,000 spectators.

The popularity probably has something to do with chili’s extreme versatility. For comfort food, few dishes beat slow-simmered chili and cornbread after a day spent hiking, snowshoeing, skiing or being outside in the cold. Making chili may be the easiest way to turn a tough piece of meat into a tasty meal. For big game hunters, chili is a perfect way to use the tougher pieces, such as meat from the neck or lower legs.

Many cooks claim chili is best made the day before, and then refrigerated. Then, all that remains is to warm it. This makes a quick, easy meal for busy nights.

No matter how you like it, there is just something about a bowl of chili!

This chili recipe has been evolving over the years. It has been a hit at hunting camps all over the country.

Saute meat in hot oil. Cook peppers, onions, celery in oil. Add tomatoes and other seasonings. Cook very slowly for one and one-half hours in covered pan. Add beans and cook for 20 minutes.