Wilderness survival tools: My ten favorite knives for all occasions

A  perpetual question and topic for debate around campfires has something to do with “If you could only have one knife, what would it be.”  But what is your top ten favorite knife list? Here’s my choices.

Swiss Army Knife Classic: This tiny knife goes with me everywhere. I first got my first Classic years ago as a performance award on the job. I appreciated the thought, but privately wondered what good the dinky knife would be. After carrying it for a week, I wondered how I ever got along without it.

I’ve used a Classic at weddings, when helping someone move, for cutting string, opening packages, slicing cheese etc. The knife has a fantastic tweezers, a very-useable 1-1/2-inch blade and a great scissors and toothpick. It will do about 80 percent of what you need a everyday carry pocket knife to do. Read the review.

This Master Hunter served me well on a couple of elk hunts. (Click on the photo to read the review.)

The four-inch drop-point blade design is just about perfect for big game hunting. The non-slip smooshy  handle with hilt is just right for keeping your hand from slipping when the knife is covered with blood or guts.I would be hard-pressed to improve on the overall design. If you could only have one knife for big game hunting, the Master Hunter just might be the best bet. 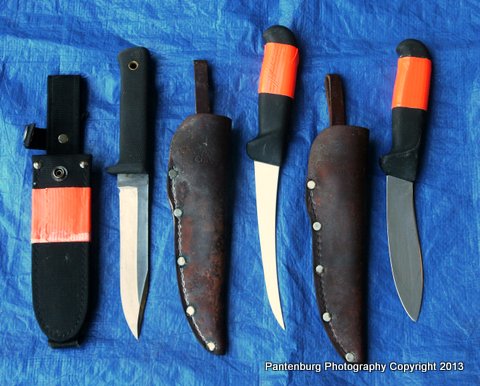 This trio had ridden in my daypack on many hunts. From left: Cold Steel SRK, Forschner six-inch boning knife and Forschner five-inch sheep skinner

My backcountry hunting trio: These knives have proven themselves time after time over the years. With the addition of a folding saw and some paracord and game bags, they are all the tools I need to handle a deer or an elk in the backcountry.

Cold Steel SRK: The initials stand for “Search and Rescue Knife,” and it would work well for that. But when I bought my SRK  in the early 90s, I was looking for a rigid blade hunting/survival knife that could do it all. Over the years, the SRK has never let me down, and I use it mostly for gutting and splitting the ribcage. This is my nomination “If you could only have one…”

Forschner flexible-blade, six-inch boning knife: This is also my favorite fishing fillet knife. I have several of these Forschner boning knives in different lengths for meat cutting, but the one everyone seems to reach for is the six-inch.  The Forschner handles work well and don’t slip, even when covered with blood or fish slime.

Forschner sheep skinner: This is a superb skinning tool and the cost is reasonable. I filed the blunt end into a point, to make the design more versatile. I’ve gutted a couple deer with a sheep skinner, and got the job done. 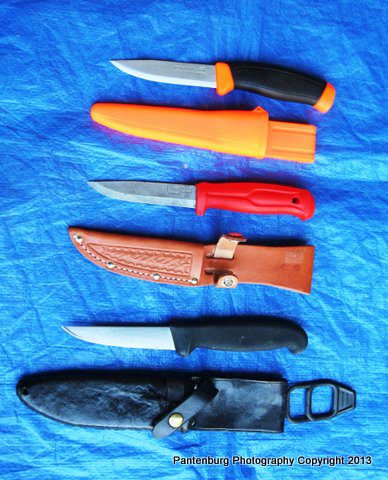 Mora: Mora is a brand name. I define a Mora style as a knife with a  rigid, three-to-four-inch blade, a Scandinavian grind and overall length of about eight inches. The handle typically doesn’t have a guard, and the knife is intended to be an all-purpose, general-use cutting tool. It is hard to come up with a better, overall all-around knife. Here are my favorite Mora-style knives.

CT Fischer Nessmuk: Nessmuk was the pen name of George Washington Sears, an outdoorsman who  canoed the Adirondacks in the 1880s and wrote about it. Sears knew his tools: he carried a small, double-bitted hatchet, a two-blade jackknife, and a fixed blade of his own design.

A Nessmuk is a thin 5-inch blade with a pronounced skinning curve and a dropped point, no hilt, and an antler or wood handle. I got mine from C.T. Fischer, of Elk City, Idaho, and like it very much. Fischer’s knives are custom made out of a special steel he gets from recycled sawmill blades, and they stay sharp! See Nessmuk review

Leatherman Wave: I include this multi-tool since it is so very useful. The steel is high quality and the tools on the Wave fit my needs to a T. I carry mine in my daypack for wilderness survival, but my son Dan, the musican, carries his Wave in his guitar case. Dan uses the tool on a regular basis for setting up sound equipment.

The three-inch blade has a drop point design, and it holds an edge very well.  I wouldn’t want to try getting along without my Wave.

Puma Bird Hunter: This folder is known is a premium stock knife design. It had a saber, sheepsfoot, and a spey blade made of excellent steel. It’s

(From top) the Opinel, Imperial fish knife and Puma Bird Hunter could all serve as small game knives.

one of those wonderful tools that works all out of proportion to its price and size. I have used mine for years for skinning and cleaning small game. When you have a limit of squirrels, ducks, upland birds or rabbits to process, you don’t want to spend much time re-sharpening blades.  It’s really nice to be able to switch to a different blade on some tasks. See small game knives. 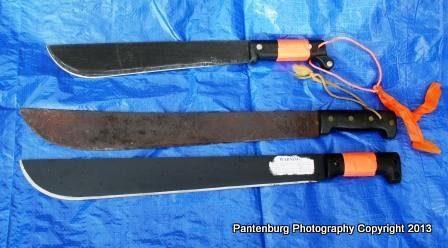 My machete collection is used mostly for making snow and brush shelters. The top 14-inch blade is most commonly used, but the others have their place.

Machete: This long-bladed knife is commonly associated with jungles and South America. But the versatility is amazing. One Christmas in Mississippi, I borrowed a machete to cut bamboo fishing rods. Two weeks later in the Oregon Cascades, I used my machete to cut snow blocks for an igloo.

There are some great machete designs on the market. But but if you look around at flea markets and garage sales, you can find some good deals. My most recent find was at a gun show, where I got a name brand machete for $3.

A machete is a garden or backcountry tool., and most people don’t think much about them. But once you start using a machete regularly, you’ll realize how useful one can be. See machetes.