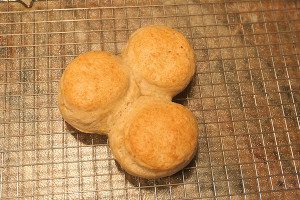 Baking great-tasting biscuits is not rocket science. Here are a few simple tips that can  help turn that mundane biscuit into  a taste treat.

Biscuits and gravy are comfort food for me, and a good biscuit is generally the sign of a good place to eat breakfast. 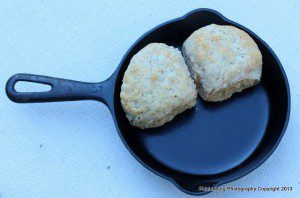 Crowd the biscuits into a tall skillet so the dough will rise upward. There were originally four biscuits in this batch, but they looked and smelled so good, I ate two for breakfast!

But some of the best biscuits I’ve ever eaten were from the late Jean Jennings’ kitchen in Mountain View, Arkansas. Jean was legendary for her delicious breakfasts, and her biscuits were tall as a tea cup and light as a feather.

The recipe wasn’t important, she said, and any simple biscuit recipe will do, with any kind of flour you prefer.

Jean’s secret was in how the biscuits were cooked.

Jean used a cast iron skillet, with tall sides, heating it to be very, very hot with bacon drippings covering the bottom. Each biscuit placed in the skillet was immediately turned over, so it had bacon grease on both sides.

The heat of the tall skillet helped the biscuits to rise. Butter, gravy or some kind of jam made a breakfast at her house memorable.

My friend Gordon A. Cotton, of Vicksburg, MS published this technique in his historical cookbook “The Past…and Repast, Recipes, Old Photographs and Bits of Vicksburg’s History.”

And here is a great biscuit recipe from that book.

This recipe appeared in a cookbook published in Vicksburg in 1937 by the home demonstration agent, Mrs. Judson Purvis, with recipes contributed by Home Demonstration Club members.

Leon Pantenburg is an avid Dutch oven cook, judge, teacher and a charter member of the Central Oregon Dutch Oven Society. Along with team mates Linda Stephenson and Michael Pantenburg, he has been a two-time finalist in the International Dutch Oven Society’s World Championships.