This is my opinion. I was not paid to do this product review!

Dutch oven cooks tend to fall  into two schools of thought: There are the frequent checkers (when it comes to lifting the lid and looking at the cooking food) and there are those never want to open the oven while cooking.

I am a frequent checker, since I don’t want to burn anything. My wife wants to leave the lid down. Her reasoning is that every time you lift the lid to look at the food, heat is lost. When we cook together, differences of opinion occur! 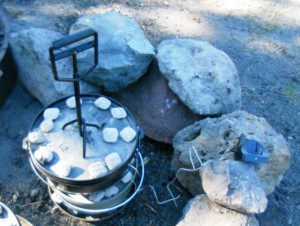 The meat thermometer can save a lot lid lifting to check cooking progress!

Recently, I tested the Camp Chef Remote Meat Thermometer at a Dutch oven dinner.  My family met with two other families at the beach at Elk Lake, Oregon, for a gathering that included dinner. My wife and I cooked in our Dutch ovens, and the menu consisted of baked chicken, vegetables, salad, macaroni salad, and  variety of snack items and traditional picnic fare.

I handed the thermometer to 11-year-old Walter Lafky, and asked him to figure it out. Walt (who, incidentally, won two blue ribbons for baking at the Deschutes County Fair the week prior) was having his first Dutch oven cooking experience. It didn’t take Walt five minutes to read the directions and figure out how to operate the thermometer.

alarm. The remote works up to 100 feet away (It did on the beach, anyway. If you had trees, rocks or other terrain features between the remote and the thermometer, that might be another story!)

The probe and wire are rated for over 475 degrees, and it has a fully-adjustable monitor.

Camp Chef Dutch ovens have special slots in their lids to accommodate the  probe wire, but my Lodge 12-inch cast iron oven didn’t. That meant the lid had to rest on the probe wire while cooking, and that it didn’t seal as tightly as it normally does.

This didn’t prove to be a problem at all with the chicken, since there was plenty of moisture in the chicken and marinade. But having the lid slightly ajar might be an issue if you were baking a prime rib, meatloaf, or roast, where you wanted to precisely bake the meat without drying it out.

We stuck the probe in the meaty part of a chicken quarter, and at first, the probe proved to be wildly inaccurate. Turns

out, we had poked the probe all the way through the meat and it was resting on the metal. Once the probe was re-inserted correctly into the center of the mass, the probe proved to be spot-on accurate.

The probe also worked nicely for  checking the meat for being done. It recorded the temperatures accurately and quickly.

So overall, I would give this product a high rating.

If you are cooking for a large group outside, using multiple ovens, it would be very helpful to have the meat monitored by the remote  thermometer. It would eliminate the need to open lids to check on cooking progress.

On the down side, though, the thermometer might not be the best choice if you are firmly committed to  a brand of Dutch oven that doesn’t have the probe slot in the lid.

As a survival tool, the thermometer (or any electronic device!)  is as reliable as the batteries that power it. Of the things you need in your Dutch oven survival kit, you could probably rank the thermometer somewhat lower on the list.

But not everything on the prepper/survival preparedness list needs to be deadly serious! Practicing your survival/prepper skills can be fun! There is nothing wrong with setting up the Dutch oven with a nice roast, inserting the thermometer, and supervising the oven from the comfort of a lawn chair while you enjoy the company of friends!