What is the best backcountry knife if you’re going to be hunting big game in remote, hard to access areas? If weight is an issue, what is the best choice in this critical survival/hunting tool? Here is what an expert chooses!

Randy Yow, of La Pine, OR spends his time doing what most big game hunters can only dream about. As host of the popular “Extreme Desire” on the Pursuit channel, Randy is in the field about 60 days a year, pursuing different species of big game in several western states. In any given year, Yow’s group  may harvest bighorn sheep, bears, deer, elk and antelope

Yow’s TV show confirms  that he is a very savvy  hunter. 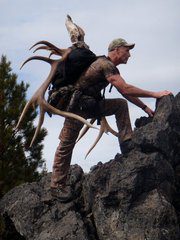 Randy Yow heads back to camp after a hard day at the office.

But as any successful backcountry hunter can attest, once the game animal is down, the fun is over and the hard work begins. If the meat is going to taste good several months later, the animal  must be gutted, skinned and quartered as quickly as possible, and the meat must be cooled.

The meat must also be transported back to camp. (That statement is so inadequate! If you’ve ever hiked a few miles back to camp with an elk quarter strapped to a backpack frame, you have a new definition of “hard work”!)

To the backcountry hunter, who must carry all his survival and hunting gear, while covering several miles a day over mountainous terrain, every ounce counts. That should be a consideration when choosing any piece of gear.

I already have strong opinions about backcountry knife choices. (To read the story, click here.)

Last year in the field, Yow personally took care of  “at least four or five” elk, 12 to 15 deer, bear and antelope.

What cutlery does Yow carry?

Well, he is a user, rather than a collector, and Yow relies on off-shelf, moderately-priced knives.

Yow doesn’t carry a saw in the backcountry  and relies on a medium-sized hunting knife for all his field-dressing, skinning and quartering jobs. 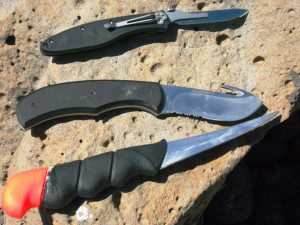 “Folding knives are nice to carry, but they can hurt you, if the blade folds on your fingers,” Yow said. “My first choice for big game hunting would be some sort of mid-sized, fixed-blade knife, with a blade length between four and five inches long.”

With that criteria established, Yow also prefers a drop point design, with a pronounced curvature in the front for skinning, with a full-tang blade construction. The knife has to be lightweight and strong, he added.

“Any backcountry knife has to have good steel,” Yow said. “It it doesn’t hold an edge, it isn’t any good. A dull knife can be dangerous!”

As far as the grind in the blade is concerned, Yow doesn’t want too much taper. He likes a hollow-ground bade, but admits that style doesn’t keep a durable edge.

“I don’t know enough about steel to know what I want,” he continued, “but I like a sharp knife. You’re less likely to hurt yourself, and everything associated with cutting is easier.”

So within those perimeters, here are the knives  Yow carried and used last year:

Browning Model 154RMEF: This is the knife Yow uses for skinning. He got the knife through the Rocky Mountain Elk Foundation, but said it it could benefit from some design changes. Specifically, Yow would like the blade to be longer, so it is between four to five inches long, with no gut hook or serrations. He prefers a “solid” handle that won’t get slick during a gutting or skinning job.

Six-inch filleting knife: As a cutlery enthusiast, I was surprised that someone with Yow’s credentials would use a cheap fillet knife so extensively. (This is the knife Yow uses in his DVD “Quick Quartering Big Game.”) Using only this (Editor’s note: crappy) fillet knife, which has a broken handle and probably retailed for about $4.95, Yow reduced a bull elk carcass to four quarters and boned out the meat in about 30 to 45 minutes! As in everything, skill trumps gear every time!

To keep his knives sharp in the field Yow has carried the same diamond sharpener for about 15 years. It breaks down to store in its own handle, and is small, light, and works well to keep a usable edge on a hardworking knife. If a knife is dulled taking care of a carcass, it is re-sharpened back at camp that night.

“The less I have to take care of a knife in the field, the better off I am,” Yow said. “Always use safe knife handling techniques, and never cut toward yourself!”

Randy Yow is the host of  Extreme Desire, and it airs on the Pursuit Channel. The website is  extremedesiretv.com, and it will have all the season’s episodes on it by about  Sept. 15.  Big game hunting in the American West is one of his passions.

Hunting mostly  on public lands, Randy’s philosophy is that  anyone who does his homework can enjoy a big game hunting experience. (To check out the website, click here.)

“My Dad was an outfitter and guide as I grew up, and my whole life has always been in the great outdoors. I was raised around a family full of ethical outdoorsmen and women, where the values of  honesty, integrity and respect for the wildlife and land we hunt were instilled in me.

“I am first and foremost a family man, raising two beautiful daughters and blessed with grandchildren. My whole family is involved in hunting, and I have been truly blessed to get to spend so much time with them.

“I like to hunt big animals, but  feel that the good Lord, family, friends and comradery are still number one.”