Whether you hunt small game, or raise rabbits for food, knowing how to cook the meat of these animals could be  a very important survival skill. 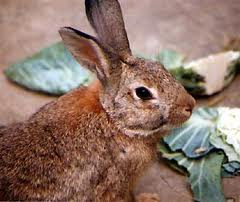 If you are looking for efficient food production, consider this: rabbits will produce six pounds of meat on the same amount of food and water as it takes one cow to produce one pound. Rabbits can be raised in small areas, with a minimum of effort, and produce top quality protein. Unlike chickens, they’re quiet and produce very little odor.

And rabbits are notoriously prolific. A doe rabbit that weighs 10 pounds can have eight litters of eight rabbits each, and produce 320 pounds of meat in a year.  In 1859, a single pair of rabbits was released in Victoria, Australia, and in 30 years gave rise to an estimated 20 million rabbits.

When it comes to wild game hunting, rabbits are at the top when it comes to numbers of animals harvested each year by hunters. They are easy to hunt and field dress, and the taste can’t be beaten.

This recipe, from “Linda Stephenson’s Wild Game Dutch Oven Cooking: From the Hunt to Your Table” combines off grid cooking techniques with fine eating!

In a paper bag, mix flour, nutmeg and sugar. Remove rabbit from liquid mixture: Dredge rabbit in flour mixture and then add to9 hot drippings in Dutch oven. Brown rabbit pieces on all sides.

Stir in flour and cook until it starts to brown.

Reduce heat to a simmer and gradually add milk, stirring constantly until it thickens.

Add rabbit pieces into the gravy, cover and simmer for 1-1/2 hours.

Linda Stephenson is a past president of the Central Oregon Dutch Oven Society, one of the largest IDOS clubs in the nation; a former IDOS regional director and she has sponsored several Dutch Oven cookoffs. Linda is also active as a Dutch oven teacher and judge, and is the author of several other gardening and cooking books.

Linda grew up in Central Oregon, hunting with her dad in the high desert. At age 12, Linda began preparing the evening meals at hunting camp, often using the wild game they had brought home. While camping the woods, Linda perfected her cooking skills over a campfire. Linda’s favorite recipes, and family favorites, are the basis for her dutch oven wild game cookbook.