Peter Kummerfeldt: Getting Rescued – To Be Seen or Not

Say you’re lost in a wilderness area. Survivors had to decide if it’s in their best interest to remain where they were or to attempt to make their own way back. This article looks at the rescue process and the survivor’s role in that process.

The single most important step in getting rescued quickly is to leave a trip plan with two reliable people you can count on to raise the alarm when you don’t show up on time.  It follows, then, that having left a trip plan you abide by it and if you deviate from the plan, inform those with whom you left the original plan.

Include in the Plan:

Names and ages of the members of the party

Equipment and clothing carried
Experience level of the group

Unusual medical conditions of any member of the group 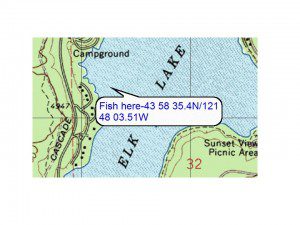 Leave your trip plan on the back of a topo map, along with where you will be going. (Blake Miller graphic)

This information should be written on the back of a copy of the topographical map you will be using.  On the map, mark your departure point, your route of travel and the dates and locations of the places you expect to overnight.

The rescue process begins when you fail to return on time and the alarm is raised by those in possession of your trip plan.  Calling 911 is usually the first step.

The operator receiving the call will alert the agency responsible for searching for missing and overdue people and a process begins.  Depending on the part of the country you live in, search and rescue (SAR) operations are the responsibility of the county sheriff, local Fish and Game agents or other law enforcement agencies working with  volunteer SAR organizations.

SAR organizations are manned by volunteers who are trained, equipped and totally committed to search for and recover missing people.  Other agencies, including the military, can become involved especially when specialized equipment is needed to find the survivors or to recover them from particularly difficult terrain.

Assuming that a trip plan has been left,  you can take comfort in the fact that an organized process exists and is being employed to find and recover you.

Without a trip plan, the process becomes vastly more complicated.  To begin with, someone has to become aware that you are overdue!  You are not at work, you failed to return home for dinner and you haven’t called your Mom lately! Once someone is aware that you are missing, the process of trying to determine your whereabouts begins.

This is usually a combined effort of local law enforcement officials, family members and friends and involves a lot of detective work.  Where you were last seen?  Who did you talk to?  What was said that might shed some light on what you were planning to do or where were you planning to go.

Your job as the survivor is twofold.

First to survive! To maintain your body temperature of 98.6º F. for as long as possible, to keep yourself hydrated and to treat any injuries as best you can (thereby giving the SAR forces a chance to recover a grateful, living survivor.) Secondly – to make yourself more visible so that they can find you quickly.

Leaving a trip plan is the most important step to get yourself rescued quickly.  The next most important step is to remain in one place and wait for rescuers to arrive.  It is very difficult for those trying to find you if you are constantly moving – or as one rescuer put it “It’s hard to hit a moving target!”  So be patient, sit tight and make yourself more visible.

Here’s how you do it.

Electronic aids: (Beacons, cell phones, family radios etc.)  Electronic signaling devices are wonderful when they work and have resulted in the rapid recovery of many people in trouble.

Some things to keep in mind:  They are line-of-sight devices i.e. if the device cannot “see” a microwave or cell phone tower, or in some cases a satellite, because of terrain, dense vegetation or other obstructions you will be unable to establish a communications link.

Secondly they are subject to failure and battery depletion.

Thirdly there have been numerous instances where the survivor was talking with SAR personnel but because of weather, rough terrain, distance or other factors, recovery was still hours, perhaps days away.  You will still have to survive until they get to you!

Pay attention to surviving and let the rescuers worry about finding you and getting you out!  All electronic devices should be considered aids to getting you found and recovered, not an excuse not to carry other signaling devices and survival equipment.  As of July 2003 Personal Locator Beacons are available that, when activated, transmit a unique signal to a series of satellites that down link the signal to rescuers, who can then home in on your precise whereabouts.

Light producing devices: For night time use handheld strobe lights, laser lights, flashlights, flares, and Chem-light sticks are all readily available.   Utilizing modern electronic search gear and night vision equipment any light source, including that of a fire or even your body temperature, can be detected.

For day time use, a commercial glass signal mirror or one that you have improvised from other shiny material can be used to attract the attention of rescuers.  Signal mirrors made from metal and plastic are available but they do not have the brilliance of a good glass mirror.  Inexpensive emergency road flares available from most auto parts stores make very good night time signals.  They are long lasting and will continue to burn even in bad weather.  (They are also good for starting fires in damp weather) If you are with a vehicle do not overlook the rearview mirrors or headlights as possible ways of attracting attention.

Noise producing devices: A good plastic whistle should be included in everyone’s emergency gear.  Unlike 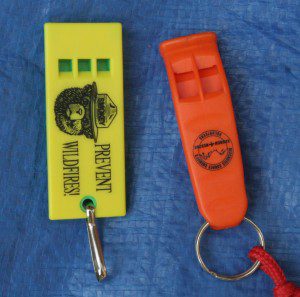 These whistles are less-likely to freeze during cold weather since they don’t have a pea in them.

your voice, which doesn’t last very long when you are yelling, a whistle can be blown all day long.  It does not require great skill to operate and can be used one handed!   Blow the whistle in series of three with a lengthy pause between each series to listen for a return blast from rescuers.

Shots fired from a firearm are usually not good signals especially if fired in daylight hours during the hunting season.  At other times of the year or if fired after dark, the sounds of gunshots can be useful in locating a survivor.

Traditionally, shots fired in a series of three are an indication that someone is in trouble.  If gunshots are to be used successfully to signal for help, those who hunt together should decide not to fire any shots until a specific time after dark.   Because gunshots tend to echo, it may be difficult to pin point their location, however hearing the shots does alert the others and preparations to begin a full scale search in the morning can begin.  It is at this time that initial contact should be made with the authorities responsible for conducting the search so that they to can begin their preparations for a crack of dawn search.

Ground to air symbols: Unlike the previously discussed signaling devices,  once constructed, symbols laid out on the ground in geometric form do not require the active involvement of the survivor to be effective.  Build them and leave them!

While there are many symbols that can be used to communicate a specific message it is only necessary to erect something that catches the eye of the SAR personnel.  A large cross is sufficient. SOS still works!  ANY mark or disturbance will be investigated once the search begins.  To be effective, when building symbols, incorporate straight lines, sharp angles and good color contrast.  If possible, symbols should be situated in a large open area where they can be seen by an aircraft approaching from any direction.

Smoke: A column of smoke  rising high into the air is easy to see from an aircraft flying over the search area and may also be visible to ground search teams.   Elaborate structures are not necessary to produce large columns of smoke, neither are three fires placed in a triangle as advocated in most survival books.

In preparation for an aircraft approaching the survivor should have collected a large pile of highly flammable materials and an even larger pile of green vegetation and placed them beside the fire.  Upon hearing an aircraft approaching the flammable materials are placed onto the existing campfire and, as soon as they are burning, the green vegetation is placed on top.  The hotter the fire the greater the amount of smoke that is produced.

It is important that the column of smoke is produced as the aircraft is approaching – smoke rising after the aircraft has passed by will probably not be seen. Allow for the fire to take a few minutes to get going.  Green vegetation will produce white smoke.  Black smoke can be produced by burning petroleum products, foam rubber from seats and even tires.  If inflated tires are used, remove the valve stem or puncture the tire before placing on the fire.  Not doing so could result in an explosion and injury from flying, burning  rubber!

Be patient. Make yourself bigger. You will be seen.  It is also very frustrating for the survivor to watch aircraft fly by, or boats fail to stop or hikers continue up the hill without reacting to your signals.  Keep in mind that an active search will not start until your trip plan expires or someone raises the alarm. Prior to the search commencing passers by will be unaware that you are overdue and may not react to your attempts to attract their attention.

Once an active search begins, any glint of light, discoloration, disturbed area or other possible sign of the missing person will be noticed.

Peter Kummerfeldt has walked the talk in the wilderness survival field for decades.Peter grew up in

For twelve years, Peter was the Survival Training Director at the United States Air Force Academy, Colorado Springs, Colorado. He retired from the Air Force in 1995 after 30 years of service.