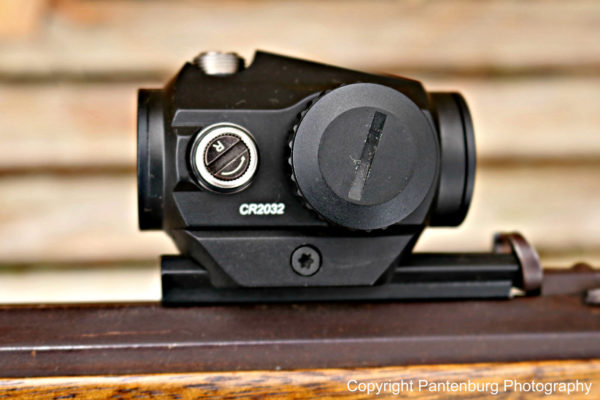 My first choice for a hunting rifle is generally one with a traditional design that shoots black powder and loads from the muzzle.

Tradition is wonderful…but what happens when iron sights don’t work for you any more? 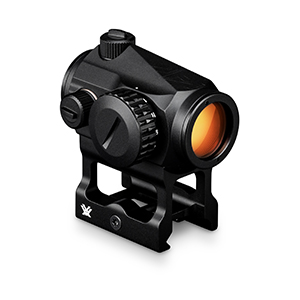 The Crossfire Red Dot was a good sight to add to my muzzleloader.

I was in  my element. It was the first day of a Mississippi deer hunting season for antlerless deer with primitive weapons. Proceeding with sloth-like speed down a steep, bushy ravine, I headed toward an area where five does had been seen the day before. I hunted all afternoon, happy to be outside, and reveling in the beauty of the day and the swamp.

My .50 caliber Lyman Great Plains rifle front sight had been painted white the night before, as has been my custom for about three decades. Periodically, I would shoulder the rifle, to make sure I could see the sights.

To my dismay, at about 3 p.m., the cloudy sky, impending rain and dark day, along with overgrown trees and bushes and the upper story canopy, made the front sight indistinct and blurry. For me, that meant the hunt was over. I will not take a shot without being sure of a clean kill.

On my way back to car, I realized it had finally, and inevitably, come down to two choices: Quit hunting with a blackpowder rifle (Which ain’t gonna happen!) or find some sort of optical sight.

This potential had been looming, off in the distance, for a while. My .50 caliber was a nearly perfect rifle for whitetails in Mississippi swamps. In the brush, the average shot would be about 50 yards, and a 100 yard shot is rare. For offhand shooting, which most of the shots would be, the traditional Hawken design, IMO,  has not been improved upon.

I didn’t want a telescopic sight, but had been looking around at optical sights with a lighted dot. After considerable research, a Vortex Red Dot was chosen. A gunsmith mounted it on the Great Plains Rifle, using a Weaver base and the low mount. It was put on just behind the rear sight,  and neither of the original front nor rear sights had to be removed.  I can still carry the rifle at its balance point.

Here are the specs, according to the Vortex website:

Compact: The Red Dot is 2.5 inches long and  weights 5.2 ounces. The lens diameter is 1.1 inches, and it isn’t particularly noticeable. The old guncase still fits the rifle with the sight on. All in all, the Red Dot is about as minimal as can be expected. 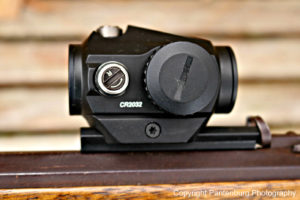 Adjusting the Red Dot is easy.

Brightness: There are 11 degrees of brightness, and this works really well. This is important, because the intensity of the dot needs to match the environment. Even in bright sunlight, the dot can be dialed to where it can be seen. And in low light situations, this sight really shines. It may have added 15-20 minutes of shooting light to my hunting day.

Durability: I won’t know about this until I’ve used the Red Dot more. But if the CR 2032

battery lasts as long as advertised, I will never have to buy another one.

Dot: There is no magnification, and the field of view encompasses the whole world. The 2 MOA means that at 100 yards, the dot covers a two-inch diameter circle, and the rifle should be zeroed so the shot centers the circle. I presume this means that at 50 yards the dot would cover one inch, and at 25 yards, it would cover 1/2-inch. This is very acceptable accuracy for a non-telescopic sight.

Red Dot mount: I used the lower mount. It is just right for snap shooting, and the dot is easy to see when the rifle is mounted to my shoulder.

If you hunt with a scoped rifle, as most of us do, the Red Dot won’t take any getting used to.

Here is how it worked out: Sighting in was a breeze, and if you can sight in a standard scope sight, you will have no trouble with the Red Dot. I was at Turcotte Shooting Range, near Brandon, MS in the rain. I started out at 13 yards off the bench. This is a good distance to start sighting in a blackpowder rifle. The 13-yard point of impact means my Great Plains Rifle, shooting a .495, 180 grain patched round ball,  will be dead on again at 100 yards. This puts the impact about 3-4 inches low at 125 yards, and I’m not going to take a shot any further than that. But I can take a head shot at a squirrel or rabbit at 25 yards, with every confidence of harvesting the animal.

Shooting at 13 yards was easy, and it only took me about 3-4 shots to get it dialed in. (The gunsmith had bore sighted the Red Dot after installing it.) At 100 yards, the 2 MOA dot appeared to completely covered the standard four-inch bullseye. Despite the dark, cloudy day and rain, and fading light at about 4:15 p.m, the Red Dot only required a single tweak to put the rifle’ group dead on. To my surprise and delight (The range officer was impressed too!) I flinched and jerked the trigger just right to dead center the bulls eye.

At this point, I am confident of taking any reasonable shot at a deer between the end of the muzzle and 100 yards. That will cover 99 percent of all the shots I will get this year. (My longest harvest shot in Mississippi, FYI, was with my 7mm-08 Remington 700 at 199 paces.)

I don’t like using high tech tools to improve muzzleloader performance. I mean, what’s the point? I have modern hunting rifles that are more accurate and efficient than the old rifles could ever be.

But hunting with the old timey guns is a choice. Going in, I know one of my cartridge rifles could kill more deer. Blackpowder rifles put the “hunt” back into hunting, and frequently,  I voluntarily handicap myself to enjoy that hunt more.

That said, I am pleased with how the Red Dot is working out. It doesn’t look all that bad on the old muzzleloader and it means I can continue hunting with one of my favorite hunting rifles.
Please click here to check out and subscribe to the SurvivalCommonSense.com YouTube channel – thanks!