GPS receivers provide an amazing amount of information. They come loaded with many navigation features, maps, tide data and much more, but nothing is more important than position data and the direction to a waypoint. 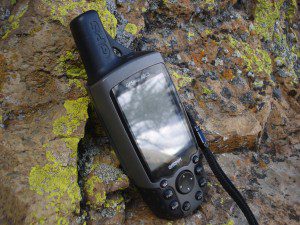 Set your GPS to match your compass.

Much of land navigation is based on the relationship to the
North Pole; also known as “true north. The measure of degrees
of direction in relation to true north is called “degrees true.”

In the Navy I learned to keep my navigation simple.

The hiker can select either degrees true or degrees magnetic.  It is a matter of personal preference; a choice.

Today, what works for me is to use a magnetic compass (e.g., the Brunton 8010G or Silva Ranger style) that can be adjusted to report in degrees true (some compasses come with declination increments scribed on the housing but this is not the same thing.)

My US Geologic Survey and National Forest map are all laid out in relation to degrees true.

Brunton’s models can be adjusted by simply turning two components (the outer ring and the clear cylinder that houses the magnetic needle) while the Silva models come with a small flat screw driver to make adjustments.  Check the owner’s manual for detail on how to adjust the compass.

Importantly, the adjustable compass eliminates the requirement to calculate for declination. Do remember that the magnetic needle always points to magnetic north and the adjusting accounts for the angular measurement of declination.

To change this default setting on my Garmin GPSmap 60CS I’ll go to the main menu and select “set up.” 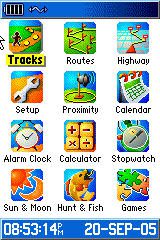 From the “setup” menu I’ll select “heading.”  The “heading” feature will allow me to adjust my compass settings in the GPS.  Note: some models will have you select “compass” to make adjustments. 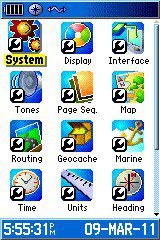 The image to the right is the “heading” menu.  Now select “display” and the following drop down menu will appear.  Note: The GPS receiver is already set to degrees true and a low battery alert is present.

With the drop down window open, select degrees.  I have never found the option “cardinal letters” to be of much use in the 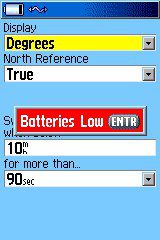 After selecting degrees, go down and select the drop down menu option”north preference.”  Select true. 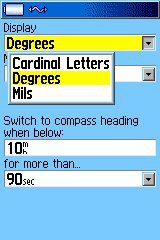 That’s it.  The GPS receiver should now be set to provide direction information (e.g., bearing and heading) in degrees true.

For those receivers with an electronic compass remember to “calibrate” the compass after changing or removing batteries.

To hear the Blake Miller interview about choosing a magnetic compass and GPS on SurvivalCommonSense.com Radio, click here.