Five reasons why I hunt 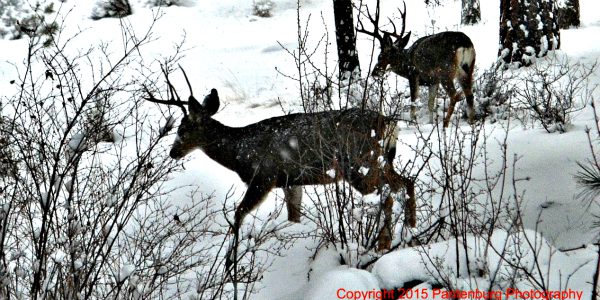 Here is hunting, reduced to its bare essence. I intend to kill an animal and then I will eat it.

When hunting season starts, somebody inevitably questions why I participate in a blood sport, with the ultimate goal of killing something. My response depends on who is asking.

There is no point in trying to explain hunting’s  intangibles to a rabid anti-hunter or PETA member. Their minds are already made up.

But suppose you, a hunter,  are approached by a person neutral on the subject who is genuinely seeking some information. They might be asking because they are considering learning to hunt. They could be prepper/survivalists who want to learn a survival skill. Or they could just be curious why a normal-appearing person would engage in behavior that some groups and organizations label abnormal. 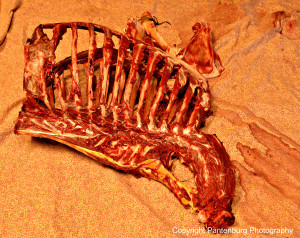 This bull elk carcass was boned out and every usable shred of meat was used.

Here some thoughts on being a hunter:

Hunters (and fishermen) pay for conservation: The money collected from taxes on firearms, ammunition and various outdoor gear associated with hunting and fishing fund the fish and game departments in many states. Bird watchers, hikers and backpackers don’t get taxed or pay these same license fees, but they benefit.

When wildlife habitat is improved for one species, it also improves habitat for many non-game species. When watershed environments are improved for fisheries, everybody benefits.

Before I go elk hunting, I will have paid $58.00 for my Oregon resident combination hunting/fishing license, and another $42.50 for my elk tag.  If I ante up for an Idaho non-resident elk tag and hunting license this year, it would cost $154.75 for the license and $416.75 for the tag. There is also the boost to the local economy. Sportsmen buy food, gas, equipment and stay in local motels. A community with a resource hunters can use benefits economically. 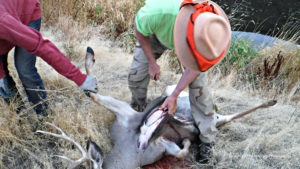 I’m involved with every aspect of harvesting, butchering and cooking wild game meat.

Organic food: I’m a meat hunter, first and foremost, and don’t care about trophy racks or harvesting record book animals. I will shoot the first legal game animal I see. But I am also particular about what my family eats, and I’m involved in every step of the meat harvest.

Wild game meat is organic and nutritious, with no steroids, growth supplements or weird vaccines in it.  Any  animal I kill ran free and wild until its life was ended, and it didn’t go through a lengthy ordeal before being slaughtered at some meat factory. My family cuts, wraps and freezes the meat from all the animals we harvest, and nothing is wasted. Scraps and trimmings left over after processing an animal carcass are cooked and fed to my dog, Naga. 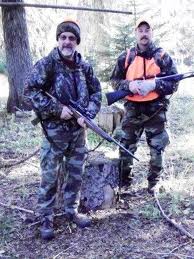 Me and my brother Mike Pantenburg all cammied up to go elk hunting. (Bob Patterson photo)

Tradition: In my family, people start hunting as soon as they pass a hunter safety class and are old enough to be responsible.  For many people, the annual pheasant, dove or big game hunting trip is a family tradition.

My brother has been my hunting partner for four decades. In 2010, Bob Patterson, my college roommate at Iowa State University, joined us for an Idaho elk hunt. Hunting can provide quality family time, and a setting, place and reason to get together.

Killing is not important: Pulling the trigger, or loosing an arrow at the end of a successful stalk, is almost anti-climatic. Most ethical hunters feel that the actual kill is a minor part of the experience.

The average elk hunter, according to national harvest statistics, may kill one elk every eight years. I know people who have continued to hunt elk for 20 years and never killed one. In my state, according to the Oregon Department of Fish and Wildlife, the overall success rate for elk hunters is 16 percent. 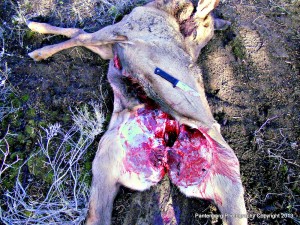 This elk calf was part of an anterless hunt to maintain a stable population for the habitat. It died instantaneously.

I choose the animal’s death: “Call of the Mild” traces a big city woman’s journey from non-hunter to that of an enthusiastic participant. Author Lily Rath McCaulou presents a reasoned, well-thought-out approach why  people should hunt.

One of Lily’s most convincing sketches describes in detail the awful life of the pen-raised chicken she bought at the store versus the wild, free life of the goose she shot.

An ethical hunter will do everything possible to assure a quick clean kill. My 7mm-08 Remington has killed 23 deer with 23 shots. I don’t claim sniper-like shooting skills, but I won’t take a shot that is less than certain. I have passed up shots on four bull elk for various reasons. One of those  bulls was about 400 yards away and right on the edge of the timber. I called another bull in to about 15 feet in very heavy brush. Neither opportunity was a certainty, so I didn’t pull the trigger.

An aspect often overlooked by the antis is the manner of death a wild animal will have if a hunter doesn’t kill it first.  A natural death can be awful. An animal in the wild can die from starvation, accident, forest fire, drowning or by being torn apart by a pack of wolves or coyotes. By comparison, a well-placed arrow or bullet is a mercy killing.

Books have been written, pro and con, about the topic of hunting and the ethics surrounding it. If you’re a hunter, you need to have a well thought out reason for being a hunter, because someone is sure to ask the “Why?” question.