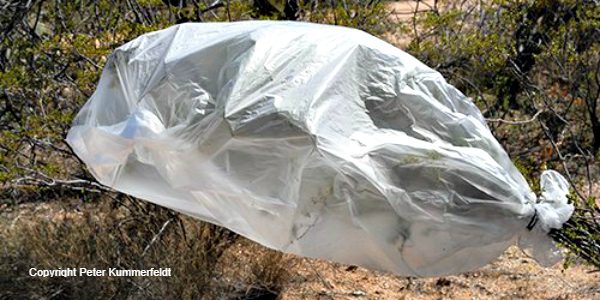 Irony: During floods, muddy, filthy water inundates everything, but there is generally a shortage of drinking water! People stranded by standing water may be able to adapt desert survival skills to gather potable water.

Widespread flooding in the aftermath of hurricanes and storms leaves residents residents without water. 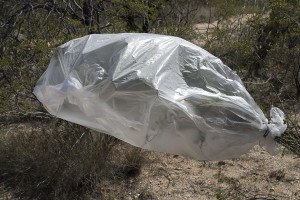 With the widespread and lengthy flooding all over the country, who knows if the worst is over?

What happens in a long term situation, such as after Hurricane Katrina, where people were stranded by high water for long periods of time? In those situations, staying hydrated in the heat becomes incredibly important.

“In priority order, after shelter and the need to defend your body temperature, preventing dehydration is the survivor’s next most important necessity,”  says survival expert Peter Kummerfeldt.

In some areas, drinking water can be found in vines. Another way to gather drinking water during a flood might be to set up transpiration bags, a method typically considered a desert survival technique. 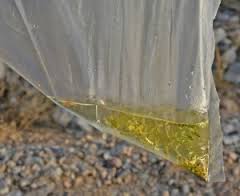 The amount of moisture that can be gathered from a transpiration bag varies, depending on a different environmental factors. (Peter Kummerfeldt photo)

This survival  technique relies on a process called transpiration, which goes on constantly during the daylight, in deserts and swamps alike. During transpiration, trees absorb moisture through their roots, and evaporate water through openings in their leaves, according to USGS Science for  a Changing World. Trees tend to transpire more with increased temperatures, sunlight intensity, water supply, and size. When it gets too hot, though, transpiration will shut down.

“The vegetation should be given a vigorous shake before placing it in the plastic bag,” Kummerfeldt advises. “This is to remove any insects, bird droppings or other materials that might contaminate the water.”

Within a short period of time, water will begin to condense on the inner surface of the bag, collect into water droplets and drain to the lowest point of the bag.

Water quantity depends on the amount of moisture in the ground, and vegetation type. Other factors affecting water production include the amount of sunlight available, (it doesn’t work at night) the clarity of the plastic bag and the length of time the process is allowed to work.

“It is not uncommon to find two or three cups of water, and sometimes much more, has accumulated over a six-to-eight hour daylight period,” Kummerfeldt said.

The best way to remove the water without disturbing the bag, he added, is to insert a length of vinyl aquarium hose through the neck of the bag down to the lowest point where water will collect. (This should be done during assembly of the apparatus.) The water can then be sucked out or possibly siphoned into a container.

“When enclosing vegetation in the plastic bag it is advisable to place chicken egg sized stone in the lower corner where the water will collect,” Kummerfeldt said. “The weight of the stone creates a separation between the enclosed plant life and the water and keeps plant saps from contaminating the water.”

“You can’t count on large quantities of water being produced in individual transpiration bags,” Kummerfeldt cautions. “But you must do everything you can to stay hydrated.”