I was not paid to do this review. The following is my opinion, based on field testing. All I ever guarantee is a fair review. I will not sell, nor help anyone else sell any product I would not use myself.

One accessory I field-tested last summer was the Dutch Oven Dome. When used in conjunction with the double-burner and my Lodge 12-inch camp oven, this is a winning combination! 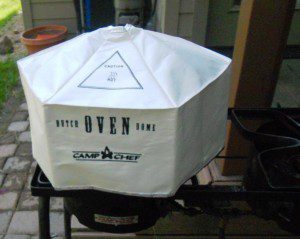 Long before I gave much  thought to buying gear for long term survival, I bought a Camp Chef double burner propane stove.

At the time, during the early 1990s, I was looking for a reliable outdoor stove. It would be used to cook fish in a Dutch oven, boil lots of water quickly, serve as the main cooking stove for hunting and fishing camps, canning with a pressure cooker. The stove would be required  to do all the other things you’d expect out of an outdoor cooking implement.

The double burner has served me well for years! (To read the complete story, click on stove review.)

The Camp Chef people, to their credit, realize that stove is the basis for a complete set of  preparedness tools and have added accessories accordingly.

According to the package, the dome works by diverting, trapping and circulating the heat, creating a convection oven for cast iron outdoors. It reduces or eliminates the cost and mess of charcoal.

That last statement is important to the prepper/survivalist. One vital stockpile when the  SHTF (Stuff Hits The Fan) survival scenarios is fuel for cooking. In some instances, such as in the aftermath of a tornado, flood or other disaster a critical need would be water purification. Sometimes, boiling might be the only practical method. And the most effective stove  for that could be one that used standard propane containers, such as you’d find on barbecues.

In fact, during an urban situation, salvaged propane cylinders  from barbecues might end up being the safest, most plentiful single fuel source available.

And what about your storage foods? Some of them require lengthy baking times. If you have a campfire and lots of firewood, you can use the coals. But it takes a tremendous amount of burned firewood to make enough coals for extended baking. If charcoal and/or firewood are at a premium, what could be the best alternative for using on your Dutch oven?

After testing this Dutch oven dome, I’d suggest you consider it as part of your survival/off-grid cooking system.

The dome creates a convection oven atmosphere around the cast iron camp oven.

The dome is made of a sturdy, flexible reflective material, and it comes folded neatly in a square box. A circular metal disc comes with it, and the disc is placed over the flame. The disc defuses the heat and spreads it.

It is simplicity itself to use the dome. Light the burner, place the disc over it, and place your 12-inch  camp oven on top. Cover the whole setup with the dome.

The first time I used the dome was with a batch of biscuits. I had no idea of what to set the heat level at. So, assuming that a medium flame would produce a hot oven, that’s what I set the controls on.

When I checked a few minutes later, the bottom of the biscuits were already getting brown. I cut back the heat to low, and that setting proved to be about right.

Once you figure out your baking setting, the dome/double burner/camp oven combination worked with monotonous reliability. Once my setting was dialed in, there is no challenge at all to producing uniformly-baked foods. I would assume you could use the Camp Chef Remote Thermometer to get your settings down to really, really precise measurements.

The dome would work well with a roast or any other dish that required baking. And because the most effective settings (for my needs, anyway) are relatively low, there is not a tremendous propane consumption.

You will have to experiment some with the dome to figure out the best settings for your needs. Elevation, humidity and outside heat will all have some impact on how the dome works in different areas.

I didn’t do a lot of testing with other size ovens, since the 12-inch worked so well. I would image that a 14-inch oven might be too big for the dome to work effectively. Also, a smaller 10-inch might allow too much space between the oven and the dome sides for it to function as it does with the 12-inch.

You’ll just have to try it out!

But for my purposes, the dome works so well with the 12-inch camp oven, that there doesn’t seem to be much reason to experiment further!