How to choose the best saw for a survival kit

Peter Kummerfeldt’s gear has been tested and refined over five decades of hands-on, in-the-field use.

He choses a saw – every time – over an axe or hatchet for use in the backcountry,  Here’s why.

Cutting tools, in all of their variations, have been an integral part of my life. In my world the term “cutting tool” encompasses knives, saws and shears. 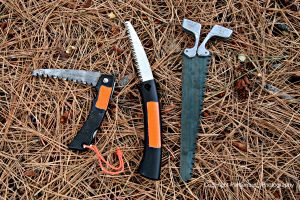 Any of these lightweight saws are a better choice than a hatchet.

It does not include axes and here’s why. Nobody knows how to use them safely anymore!

In grandpa’s day someone had to fell trees, chop the wood into manageable lengths and then split it into pieces suitable for the kitchen stove or the furnace. With rare exceptions that’s unnecessary today. People of that era became very proficient in the use of axes.

When I began my Air Force survival instructor career we were issued an ax and instructed in its use. We were expected to be able to cut the wood needed to keep our students warm in the field regardless of the weather conditions. We, too, became very proficient with axes.

Today the only time axes are used are those all too infrequent opportunities we have to take the family camping or perhaps during the annual hunting trip. The gear is gathered and off we go to the woods.

In the hands of an inexperienced person an axe, be it hand axe or larger, is an accident looking for a place to happen! And happen it will! Axe injuries are often severe sometimes including amputations! Leave your axes at home and take a good saw!

I have never found myself handicapped because I chose to carry a saw rather than an ax. I can’t think of anything that I can do with an ax that I can’t do with a saw.

How, you ask, are you going to drive a tent peg with a saw?

My answer: “I’ll cut a chunk of wood and use it as a mallet!”

There are many saws available some of which are very useful and others not so much. Let’s take a look at a variety of them starting with the least useful.

Survival Wire Saws. These holdovers from WWII are still found in many survival kits and are commonly sold separately under the Coghlan’s brand. Avoid them. They don’t work.

Pocket Chain Saws. There are several varieties of these but only

one that works well – the Pocket Chain Saw. This saw comes packed in a tin containing not only the saw but also two steel handles as well. Unlike the others this saw will cut through a four- inch limb in a couple of minutes with minimal effort on your part. The downside of this device is that it takes two hands to make it function. Being able to operate any tool with only one hand or arm is a distinct advantage when the other limb is injured.

Folding Saws. Again there are many varieties of small folding blade saws. The smallest of these includes the three or four-inch long blades found on Swiss Army style pocketknives. The short blade length makes this type of saw totally impractical for producing firewood but may have some “improvising” utility. (Making needed “things” out of other available material.)

Longer folding saws may be more useful but again are limited by their short blade length. If you decide to carry one of these saws, select on that cuts both on the “pull” and on the “push.” Check the hinge carefully. Some are prone to loosen allowing the blade to fold back onto your hand causing injury.

Bow Saws. Generally bow saws have a longer blade than folding saws making them a more useful cutting tool. Two limiting factors should be considered: Bow saw blades are thin and narrow which makes them subject to bending and then breaking. Secondly, the height of the bow from blade to the top of the arch dictates the depth of the cut that can be made before the log being cut has to be re-positioned.

Non-folding Pruning Saws and those saws used for light tree limbing are very useful tools for cutting wood and snow blocks and for dismembering animal carcasses. An eighteen- inch blade length is ideal. This length is very efficient allowing for a full extension of your arm when sawing. The aggressive saw teeth do not bind up and quickly cut through large diameter wood without it having to be re-positioned. Beyond periodically tightening the screws that attach the handle to the blade and an annual sharpening this type of saw requires minimal maintenance.

Carpenter Saws, a longer version of the pruning saw, are equally suited to producing large quantities of firewood quickly. The drawback to a carpenter saw is length. Typically 24 inches long this type of saw is too long to fit in a backpack but is suitable for a vehicle survival kit or perhaps those who travel by horse.

Shears: When traveling beyond the limits of the tree line either by ascending to higher altitudes or moving toward the higher latitudes, where the only available fuel for fire will be scrubby willow and alder, shears work better than a saw for collecting firewood.

Hacksaw: While you can cut wood with a hacksaw, the teeth are tiny and they are designed to cut through metal. This type of  saw is worth considering if you might possibly end up in an urban survival situation. You might need to cut rebar, copper or galvanized pipe, or any number of metal items. This is a good saw to include in the tool box in case it might be needed.

When selecting shears pick the kind where the upper blade cuts onto a flat surface – the anvil. The alternative, the type, where one blade passes by the other, tends to jam frequently. Select shears that ratchet rather than the type that require hand-strength to cut through apiece of wood.