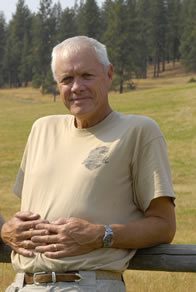 How can you tell if a “survival expert” really knows his/her stuff? Here is one who has 50 years experience in the field.

In my book, instructor Peter Kummerfeldt is in a class all his own when it comes to wilderness survival.

I met Peter about 12 years ago at the Central Oregon Sportsman Show, when I stopped by a seminar he was teaching. I was curious, more than anything else. After all, I’d been canoeing, backpacking and backcountry hunting for decades myself, and I felt like I knew my way around the wilderness.

The seminar was a born-again experience for me. In 45 minutes, I learned several things I was doing wrong, equipment I was carrying that needed to be dumped, and learned some tips and techniques I’ve used regularly ever since.

I went to every seminar Peter taught that day, and later stopped by his booth to get acquainted.

Since then, Peter has been my go-to guy for any questions about wilderness survival. His work has appeared frequently here, and Peter has his own category in SurvivalCommonSense.com.

This year marks his final speaking tour. Check it out at Oregonianlive.
Peter Kummerfeldt has walked the talk in the wilderness survival field for decades.