Land navigation: How to keep from getting lost when you can’t see terrain features

Dead Reckoning is an old skill that hikers and hunters are probably not aware of. It allows you to navigate in the dark, when visibility is really limited, or when terrain features obscure land marks. It requires attention to detail and patience.

It’s time to return to base camp.  Navigation during this trip has been by map and compass alone; no GPS.  During the three days of the outing, navigation has been straightforward and simple.  Visibility has been excellent and compass triangulation worked well.  Now as the return trip is about to begin, fog has rolled in masking terrain features.  The absence of a reliable trail system will make the return trip challenging too; travel will be overland.

A process called Dead Reckoning (DR) can be used to navigate and partially compensate for the loss of terrain features and important visual cues.  DR is a method to determine one’s estimated present and future position.   Dead Reckoning can be done during periods of darkness, bad weather, in featureless terrain (e.g., the desert, whiteout conditions) or equipment failure (e.g., dead GPS batteries.)

DR is a method of navigation dating back hundreds of years.  It works well on both land and sea.  It is nothing more than moving in a set direction of travel over a specified distance.  By looking at a map, the hiker determines a direction of travel and attainable distance.  As illustrated in Figure 1 below, travel is plotted on a map; frequent verification is important.

Factors that limit the accuracy of a DR will be the hiker’s ability to walk a straight line over rough terrain, varying elevations and the ability to accurately calculate distance.  For short hikes these limiters provide an acceptable degree of accuracy.  Long extended hikes of many miles must be updated on the map as the hiker obtains position fixes.  The estimated position plotted is just that, an estimate.  The hiker will be in the vicinity of the estimated position.

The tools needed include a quality, declination adjustable compass (such as the Silva 515CL) and topographic maps.  My preference would be to have a U.S. Geologic Survey (USGS) Map (scale of 1:24,000) and a representative Forest Service or BLM map of the area.  The USGS map provides the “zoomed in” details while the other maps provide a broad overview of many USGS maps but without the detail.  Lastly, simple map tools to bring such as a pencil, a small straight edge and a flat writing surface for support.

The personal skills needed would include a solid foundation in the use of a map and compass, and your ability to pace count for hundreds of yards.

To start the DR process, the navigator begins from a known position fix; this is essential.  A known position can be obtained through compass triangulation and map association. An operable GPS will provide acceptable position data. 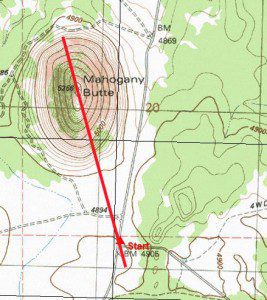 In the example (Figure 2), the position “Start” was obtained by map association and was identified as the junction of two dirt/gravel roads.  Other examples include the intersection of a road and stream, a trail crossing a road, or a trail and stream.   Further, a single line of bearing was taken and plotted from the intersection to the top of Mahogany Butte.  This plotted line of bearing is confirmation that “Start” is the beginning position.  Using the basic map tools, the hiker should begin to update/mark up the map.  From “start” mark the map the direction and distance of the intended track.

As the hiker moves out, he carefully monitors his track on the map.  Distance traveled is determined by pace count or time traveled. Use the map scale information at the bottom of the topographic map to accurately plot the distance traveled.  Neither method is precise.

Ideally, the plot is updated every thirty minutes but no less than hourly.

The plot should also be updated at every change of direction and rest stop; see Figure 3. 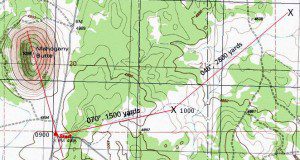 To improve the accuracy of the plotted DR, the hiker should be alert to take advantage of terrain association.  If weather permits, visually catch terrain features and hand rails.  Hand rails include linear features such as roads, streams, ridgelines, fence lines, and manmade structures.  Hand rails must be visible on the map to be of use.

Dead Reckoning is a process of collecting data (course and distance traveled) that is plotted on a map to determine an estimated position.  It takes practice.  DR is a method that will help keep you focused on navigation to keep you safe and found.