Always keep notes in your cookbook – the memories make the food even better.

In 1992, my brother, Mike Pantenburg, and friend Phil Walker were hunting the opening day of elk season near Dworshak Reservoir in

Check out these prices on MilSpec paracord

Central Idaho. We’d taken a jon boat across the lake to avoid other hunters, and set up camp. Then we split up and hunted the high ground around the shore. The idea was to use the boat to get to the more isolated areas, where the elk would go to escape the opening day hunting pressure. 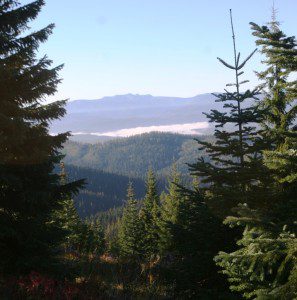 Phil had dropped Mike and me off, then left to hunt the other side.

It was a hard hunt – the terrain was very steep, and the going was slow. Mike passed on a shot at a black bear that morning, but I didn’t see anything except sign. That was enough to keep me hunting hard all day, and at the end of it, I was beat.

At dusk, as was the plan, I went down to shore of the lake and waited for Phil to come cruising up in the boat. I flagged him down with my flashlight

“How’d you do?” was one of my first questions, as Phil cut the engine and drifted to shore. He  just grinned.

“I killed a six-point bull at dawn,” Phil said, and had the rack in the boat to prove it.

“Looks like this will be a long night, packing out the meat,” I commented.

But Phil, weighing in at maybe 150 pounds soaking wet after a big meal,  had skinned, quartered and packed out the elk, all by himself. And he didn’t even look tired.

I pushed the boat back out, jumped in and we putted off to find Mike.

This recipe has the annotation on the top: “Phil Walker shot a six-point bull elk on Oct. 10, 1992 and this was the first chance we had to sample it . Delicious!” 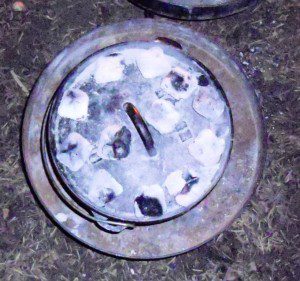 This meat loaf recipe could easily be cooked outdoors, in a cast iron camp oven.

Mix everything together except tomato soup and olives. Knead well and shape into a loaf in an oblong baking dish. Top with tomato soup and a little water. Bake at 350 degrees for about one hour.

To cook this in a Dutch oven outside, use a 10-inch baker camp oven. Use eight lighted charcoal briquets on the bottom and 12 on top. This should give you close to 350 degrees. Replace the briquets as needed, generally about halfway through the cooking.