Survival knife review: The lightweight, practial and inexpensive Mora may be the best all-around choice

Currently, the rage among some survival schools is the Mora, a small, inexpensive Scandinavian-style sheath knife with a four-inch blade and a large, easy-to-hold handle.

Personally, I think they’re great, and I generally have a Mora close at hand.

It’s all because newspaper guys, like me, research stuff. Sometimes we gather information, statistics and data for no apparent reason, and with a vague idea of what the info might be someday be used for.

The Feather Stick, top, is based on the time- tested, classic Scandinavian design, exemplified by the Mora 840 Companion.

That was the case several years ago when I bought my first Mora knife.

I was looking for a small, inexpensive sheath knife that could be recommended to Boy Scouts.

The knife had to be an all-around, do-everything tool. It would be used for a variety of tasks, which could include whittling, cleaning fish and small game, meat-cutting and peeling potatoes. It needed to be lightweight and small enough to be carried conveniently.

Practicality was paramount: A fighting knife was not in the running. I didn’t anticipate the do-everything knife would ever be thrown, used in a “tactical” application, as a prybar or as a weapon for stabbing bears.

Because you can get excellent Morakniv™ brannd knives for prices ranging from $10 to $15, I bought several versions and put them through their paces.

I got this background info on Mora knives from Ragnar’s Ragweed Forge:

The town of Mora, Sweden has been a knife-making center for centuries. Smiths in Mora developed a basic, functional style that became known as the “Mora Knife.” Until recently there were two remaining large companies in Mora, K.J. Eriksson and Frosts of Mora. They have merged into “Mora of Sweden.”

Mora knives place function before style. They have the flat Scandinavian grind that goes cleanly to the edge, and come from the factory very sharp.

A Mora specialty is the laminated carbon blade. This is a three-part sandwich, with a core of high carbon steel protected by sides of tough lower carbon steel.

Normally, my knife testing takes a while, and I focus on practical tasks the knife might be used for. Several different 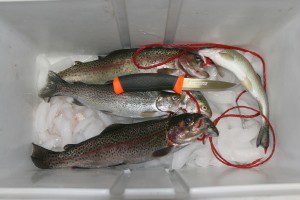 This Mora 840 Clipper was used to clean these trout, and the blade was still shaving-sharp at the end of the task. (Leon Pantenburg photo)

Mora variations were put  through these tests: 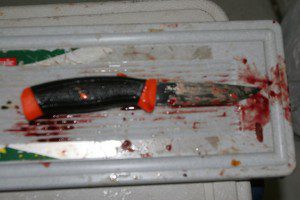 After cleaning an eight-trout limit the handle on this Mora  clipper was still easy to grasp and use safely. (Pantenburg photo)

While a  Mora can do many things well, my first choice for gutting a deer or elk would be my much-used Bark River Sahara Hunter or Kalahari. Want a high end Mora-style knife? Get a Battle Horse Knives Feather Stick.

And a Mora doesn’t have the tweezers, scissors, and toothpick of my beloved Swiss Army Classic!

While you could split kindling or baton a Mora to cut  firewood, it isn’t the best choice. An axe is!

And I wouldn’t want to have to dig a very big hole with a Mora, or any other knife, for that matter!

The Mora’s low price is a major attraction. You can get a superb knife for under $20, making a Moro a great choice for inclusion in survival caches, Bug Out Bags or other survivalist and prepper stashes. And several Moras would make a great investment now, for bartering later.

A Mora-style knife can do about 90 percent of what I need an outdoor knife to do. And while I’ve yet to find the ultimate, do-everything wilderness survival knife, a Mora-style can come really close!