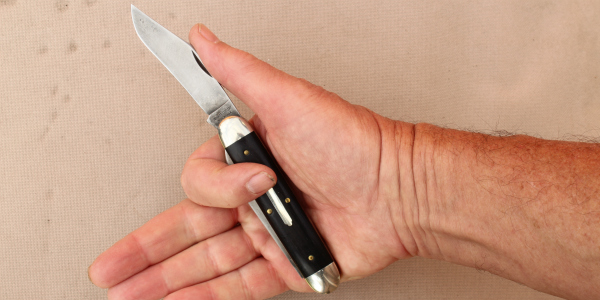 Disclaimer: Kniveshipfree.com is a Survivalcommonsense.com sponsor. I did not get a free knife to review, and neither KSF or Great Eastern Cutlery had any input into this review.

I really like the stockman pattern knife. My dad, a carpenter and Iowa farmer, carried a stockman in his left front pocket with him everywhere. Dad’s knife was a tool. He wore out pocket knives, because he used his every day, for a variety of tasks. He liked the smaller stockman version, and didn’t want a bigger one. If he needed a larger cutting implement or a  bigger knife he’d go get it from the shop or the tractor toolbox.

Naturally, a kid is going to emulate his dad. 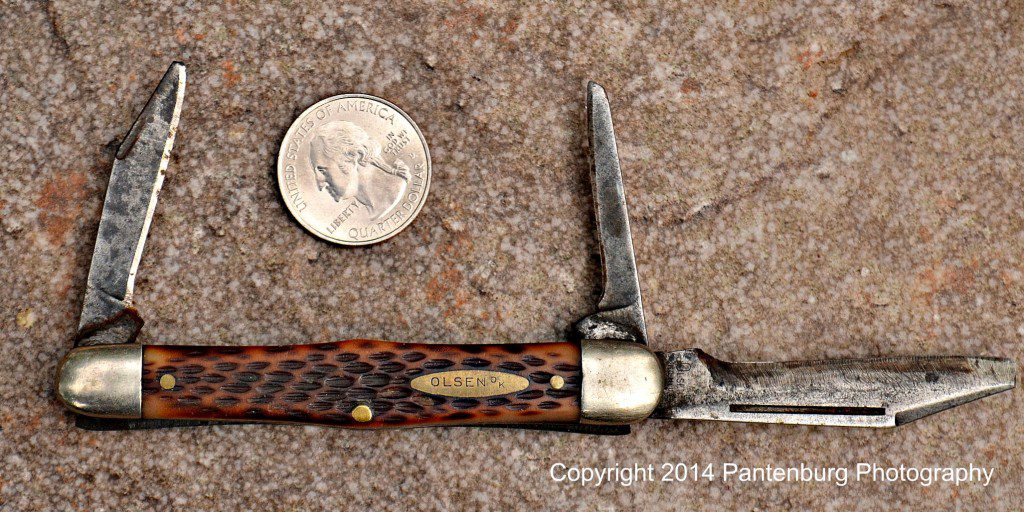 This was my dad’s Olsen stockman, and it was in his pocket on the day he died.

I carried a stockman everywhere too, including school.  In my case, my stockman was my every day carry/small game hunting knife. For a quick hunt after school, I’d get off the bus, grab a snack and take a shotgun or .22 rifle, my Zippo lighter and my pocketknife and head out the back  door.

The standard stockman has a clip, a sheep’s foot and a spey blade. They are usually middle-sized, and there are straight handled and sowbelly versions.  The design goes way back, and you’ll find stockmans advertised in the old Sears and Roebuck catalogues from the 1800s homesteader days.

So, when I saw the  Tidioute Calf Roper, made by Great Eastern Cutlery, I wanted to check one out.

Great Eastern Cutlery is a knife company in Titusville, PA committed to building knives like “they used to be.” The company was founded by master knife makers Bill Howard and Ken Daniels. Bill Howard was the chief knife designer at Queen Cutlery for years.

Materials: One of the best high carbon knife steels is 1095. It doesn’t have the glamour – or cost – of some of the super steels. Properly handled and heat treated (Like Lon Humphrey does with his hand forged custom knives), 1095 can hold a scary sharp edge, while still remaining easy to resharpen. 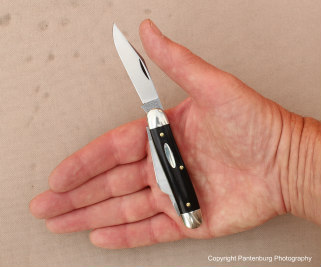 The Calf Roper is not a large do-everything knife. Overall closed length is 3-1/2 inches.

Handle: My Calf Roper has a 3-1/2 inch black gabon ebony handle that fits my hand fine. Typically, I won’t carry or use a knife with a handle shorter than four inches. With my large hands, the smaller handles just don’t work for extended use. But the Calf Roper works fine as an every day carry knife.  I do like my dad did: If the pocket knife can handle the job, fine. If not, go to the toolbox and get the tool designed for the job.

Pocket-ability: This may be the most important aspect of a knife that you will carry in a pocket. I generally carry my two layer Swiss Army Knife Tinker in a belt sheath, because it keeps the pocket lint out of the hinges, and the knife from rattling around with my loose change and car keys. But anything thicker than a two layer knife is awkward to carry in a pocket, and uncomfortable. A thin, one to two layer knife is barely noticeable.

Design: The three blades on a stockman are incredibly well-suited for a working knife. As a small game knife, for example, I used the spey blade most often for skinning rabbits and squirrels. The longer clip blade was used to clean fish and dress out pheasants and quail. The sheep’s foot was great for cutting twine or whittling. The nice thing about three blades is that when one gets dull, you can switch in mid chore. All these blades worked fine for cutting open feed sacks and other farm tasks.

Steel: IMO, a super steel or stainless is really nice, but not particularly necessary in a pocket knife. By nature and intent, your pocket knife is  your everyday carry knife, and as such, will be used multiple times every day. You don’t want a steel so hard that it holds an edge, but chips when it hits something hard. In my pocket knife, I want something like a good carbon steel that is easy to sharpen in the field, and that is soft enough to roll when it hits an obstruction.

The 1095 in the Calf Roper will be a good choice for your pocket knife. 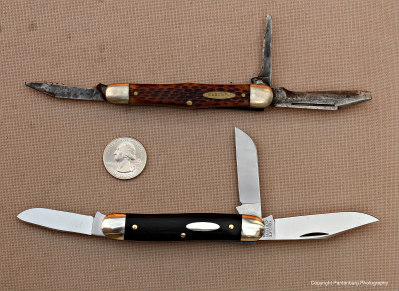 My dad’s knife, top, and this new Calf Roper have the same basic design and size.

Blade size: Awhile back, I marked the small blade on my Swiss Army Knife Tinker to see how much of the blade I actually used over the course of a couple weeks. Typically, my knife is used to cut the plastic bands on bundles of newspapers, for opening mail, cutting open plastic packaging etc. I found I was regularly using about one inch. I figured this out in college, when I worked at a grocery store and used a box cutter to open boxes of cans.

Made in the USA: Support American small businesses, like Great Eastern Cutlery. American craftspeople pay local, state and federal taxes, and they need to earn a living wage. Buy local!

Rust or stain: High carbon steel will rust if the knife is put away wet. Blood and other acidic fluids can cause it to stain. The best way to prevent either of these is to wipe the knife off after using and occasionally use a little mineral oil on the blades and hinges. Some people, like me, like a patina on a blade. It shows honest use.

Or you may decide to force a patina on the blades. I did this with another Great Eastern folder when I accidentally stained the blade with mustard from a can of sardines. I used a mixture of lemon juice and apple juice to even out the stain, and I like how it looks.

Neither of these issues is a deal breaker, as far as I’m concerned.

Do you need a Calf Roper?

Well, the knife is certainly worth looking at if you are in the market for a user knife that can go everywhere. After using a stockman for many years, I went to a Tinker, because it has a good blade selection and some extra tools I like. I carry a Swiss Army Knife Classic because it fits on my keychain.

What happens is that you’ll try a bunch of different knives, and settle on the one the works best. The Calf Roper could be that knife.