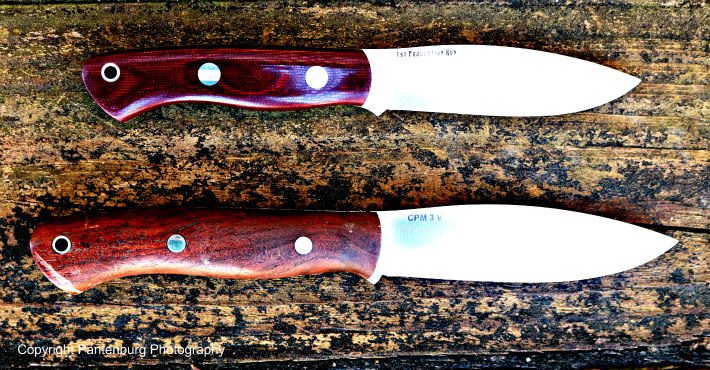 I’ve been singing the praises of the Ambush Tundra since it came out several years ago.

The latest verse will include the most recent incarnation – the Mini Tundra.

(DISCLAIMER: Knivesshipfree.com and DLT Trading are Survival Common Sense sponsors. I did not get a free knife to field test, and nobody had any input in this review. The comments in this are all my opinions, and all I ever promise anyone is a fair shake in the review.)

The Ambush Tundra is my most-carried hunting knife because it works. (The Bark River Bravo 1.25 LT is another superb hunting knife I use a lot.) Since I got my first Tundra in 2015, it’s been used to skin and field dress deer, elk, catfish and alligators. It was used to skin a squirrel, so I could say I had, and that original Tundra has also been used as a bait knife, and for myriad bushcraft and survival skills tasks. It also excelled in various camp jobs. My first Tundra worked so well I got another, in case Bark River ever quit making them. 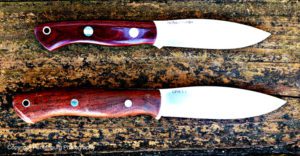 The Mini Tundra, top, is a downsized version of the standard Tundra. Both feature the Canadian leaf style blade.

Point being, I was pre-disposed to like a smaller version of my Tundra. When the Bark River Mini Tundra came out, I ordered one as soon as it was available.

The Mini-Tundra is the smaller, more compact version of the Tundra. The knife combines the Aurora handle and the Canadian series blade. It has plenty of straight edge for woods tasks, and a forward belly for hunting chores and skinning.

I will be  giving this knife a thorough field test, but here are some of the things I noticed right out of the box. 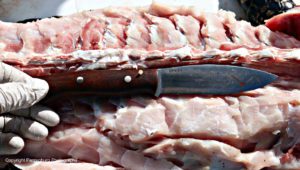 The standard Tundra worked well to skin and process an alligator last summer.

Point: The point is centered in the unique bow-back blade. This makes it easy to drill with, and it also pierces well. This is a good thing on a knife that will be used for the initial under the tail field dressing of a big game animal.

Steel: Elmax is super stainless steel. I have used it in several knives, and I don’t find it hard to sharpen. A hunting buddy of mine used his Snowy River (Elmax steel) on several big game animals without sharpening, and it was still very sharp when I got hold of it. Sharpening OCD being very real with me, I touched up the edge anyway.

Here is how Elmax works for a big game hunter.

Blade thickness: At .125 inches, the thickness of the blade is about right. A fighting knife might need a thick blade, but that’s about the only use that might require that. Besides, statistically, knife fighting is the rarest form of combat. For a belt knife, this thickness is about right.

Blade design: The Canadian leaf style design is one of my favorites, and I hope more people start appreciating how practical the design is. It is particularly effective for that first spine-down, edge-up cut that opens up the abdominal cavity of a big game animal. The bow-back spine keeps the point from piercing the entrails

Grind: All Bark River knives are convex ground, and as far as I’m concerned, convex is the best grind for a user knife. Once you get the hang of stropping a blade, maintaining the edge is a breeze. The Mini Tundra has a full height convex grind and it cuts like crazy.

Spine: The spine is ground to a 90 degree angle, like an ice skate. It will work well for shreading tinder or, in a pinch, for scraping a ferro rod. The spine edge is not so sharp, though, that it is uncomfortable to press on with your thumb.

The sheath is sturdy leather and protects the blade and user.

Handle: The handle is well-designed and has been a standard on the best-selling Aurora. For someone with small to medium-sized hands, it is going to be very comfortable to use. More on that later.

Sheath: The knife comes with a sturdy leather sheath. As is my wont, I added a D ring to make it a dangler, and attach the sheath to my belt clip.

Weight: The mini weighs in at 3.9 ounces. It is so light and compact, and the dangler attachment works so well, I hardly know it is on my belt. That convenience factor means this knife will get carried a lot.

Nit picky, ticky stuff: Nobody would ever read my knife reviews if all I ever did was praise a product, and urge them to buy one. Such “reviews” are not honest critiques – they are advertising.  And I don’t work for Bark River, don’t rep for any other company, and I don’t get free knives to review.

That said, I’m having a hard time coming up with something I don’t like about this knife. It comes with one of my favorite blade and point shapes, in a proven design knife that I know will be a superior performer.

But, I wish the handle was thicker. I wear large gloves, and at four inches long, the handle is long enough for my hand. But the handle is just too thin for me to grip comfortably for long.

Actually, I’m not really surprised. Handle ergonomics vary among people, just as hat, glove and shoe sizes do.  Bark River’s challenge with this knife is to make one with a handle that fits the largest number of users, and not just us ham-fisted guys with working man hands. For some of you with smaller hands, the Mini Tundra may end up being your best hunting knife.

I’m going to use this knife for awhile, then I may wrap the handle with tennis racket grip tape and see if I like the handle better. Then, I may send it to Pete Winkler to get a thicker custom handle put on it. I already like this knife too much to give up on it just yet.
Please click here to check out and subscribe to the SurvivalCommonSense.com YouTube channel – thanks!