What are the best choices for backpacking knives? 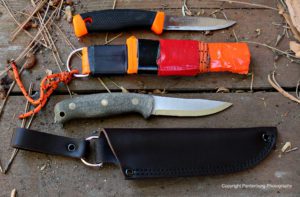 Elk Lake, Oregon is one of the major re-supply places for through hikers on the Pacific Crest Trail. Every year, a handful of  long-distance hikers will walk border-to-border on the trail. They generally start in Mexico in April, and start trickling in to the Elk Lake Resort about August, en route to Canada.

I was eating lunch at the Elk Lake Resort, and noticed a young lady trekker loading her pack for the next section. She opened her re-supply box, sliced a chunk of cheese, opened several large packages and cut a shoelace, all with her tiny, Classic Swiss Army knife.

I carry a Swiss Army Classic on my keyring everywhere.  And for lightweight hikers, who go long distances with minimal equipment, a Classic may be a reasonable choice. On a well-traveled trail like the Pacific Crest or Appalachian, you’ll seldom be isolated from other hikers for very long. 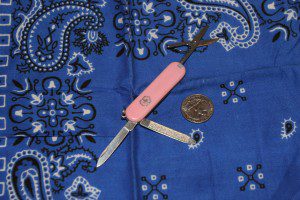 The tiny Swiss Army Classic may end up being one of the most useful knives in the backcountry!

But that doesn’t mean you don’t need a knife for backpacking. Get separated from the group, off the beaten path in the backcountry, or in some sort of wilderness survival situation and you may desperately need the appropriate knife.

If I could only pick one tool to take along in the wilderness, it would be a knife. But which one is best for your backpacking needs? How do you balance weight versus practicality?

I bought a Buck folding hunting knife in 1976 and that Buck and I bonded. It was in my pack when I hiked the John Muir Trail in California; the Thorofare Creek loop of Yellowstone, Death Valley and on several other long hikes in various western mountain ranges.

But the Buck was retired when I moved west and my outdoor needs changed.

Today, I carry two knives dayhiking and backpacking: The Swiss Army Classic and some variation of the classic Mora-style knife.  Combined weight of both knives is about four to 10 ounces (Depending on how much duct tape you wrap around the Mora sheath!)

If it is legal, I have a Classic with me at all times. It features minuscule size, and a collection of tools that can’t be beat. Because it is so convenient to carry, you will take it along. You will go from wondering what good the dinky knife is, to wondering how you got along without it!

Mora is a brand. Currently, the rage among some survival schools is some form of the Mora, a small, Scandinavian-style sheath knife with a four-inch blade and a large, easy-to-hold handle. Personally, I think they’re great, and I generally have some variation of the classic Mora at hand. 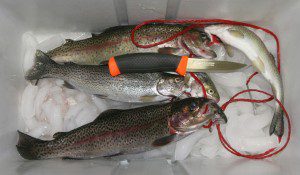 This Mora cleaned this limit of trout and was shaving sharp at the end of the job.

Several years ago,  I was looking for a small, inexpensive sheath knife that could be recommended to Boy Scouts. (Be wary of folding knives, even if they’re lockblades!)  The knife had to be an all-around, do-everything tool. It would be used for a variety of tasks, and  needed to be lightweight and small enough to be carried conveniently.

Because excellent Moras are available for prices ranging from $10 to $15, I bought several versions and put them through their paces.  Long story short – over the years, the troop has bought 90 Mora 840 Companions for the scouts to use.

If you want a sturdier – but somewhat heavier – version of the Mora, there are several available. Recently, I ran this Battle Horse Knives Feather Stick through its paces.

Here is what a backpacker gets from the combination of the two knives:

Classic: The tiny blade does most of the trips mundane cutting tasks, saving the Mora’s edge for larger jobs. The knife has a tweezers, scissors, toothpick and a fingernail file (I grind the tip to fit my glasses hinges). You will use these tools much more than you ever imagined!

Mora: Backpackers will mainly use their knives for slicing bologna, spreading peanut butter and cleaning the occasional panfish. The Mora’s four-inch blade is just the right size for these jobs, and you won’t have to clean the goo out of the hinge after every use! The larger knife is also perfect for those unanticipated bushcraft tasks that come up on the trail.

This very useful duo will take care of most of your backpacking knife needs. The combination has served me well for several years of backpacking, and is worth considering!