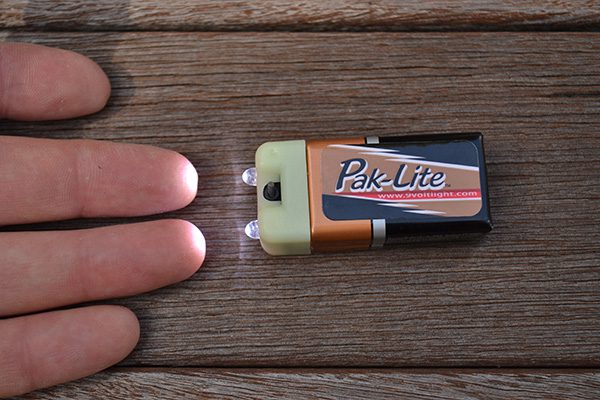 A good, reliable flashlight is essential, IMHO. And getting one that is light, convenient to carry and reliable means you will most likely take it along on dayhikes or longer excursions. I found this Pak-Lite at a preparedness show, and it is worth taking a look at.

I bought this product for field testing, and was not paid to do this review. At the time of publication, Pak-Lite has no commercial relationship with SurvivalCommonSense.com. 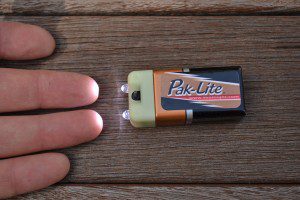 The Pak-Lite LEd flashlite is about the size of a standard nine-volt battery, and produces a lot of light. (Pantenburg photo)

When it comes to backpacking or emergency gear, the lighter the better, as far as I’m concerned.

So when I came across a Pak-Lite LED flashlight at the Preparedness Expo in Portland, Oregon, in May, I quick-drew my wallet and bought one. If it works as advertised, I reasoned, a Pak-Lite could fit in really well with my Ten Essentials and other emergency kits. After testing the Pak-Lite for a couple of months,  the light has found a home in my preparedness pack.

The Pak-Lite is absolute simplicity. It is nothing more than a LED flashlight that snaps onto a nine-volt battery. The manufacturer claims it can last up to 1,200 hours on one battery in the low setting.

The Pak-Lite story began when Barclay Henry, 20 years old at the time, decided to hike the Pacific Crest Trail 2,600 miles from Mexico to Canada. Barclay told me at the expo that he asked his younger brother, Benjamin, then 15,  to make him a small, lightweight flashlight that would last the whole trip. Barclay didn’t want to carry extra batteries or bulbs.

Pak-Lite was the result. He used the same light and battery the whole PCT hike, Barclay said, without changing a single battery or light bulb! Benjamin patented the light, and Pak-Lite evolved into a family business. Today, Pak-Lite is manufactured in Oregon, with distributors all over the U.S.

Pak-Lite is being used around the world by the U.S. Military overseas, FEMA, the American Red Cross, survival instructors, and thousands of people who want a minimalist flashlight, according to the company website.

Lightweight: The light itself weighs 1.5 ounces.

Compact: The unit is the same size as a nine-volt battery.

Convenient carry: I’ve stick the Pak-Lite in my pocket when I walk my dogs after dark. I don’t even know it’s there.

Bright: The low setting is perfect for reading in your tent at night. The high setting is very adequate for most needs. I wouldn’t hesitate to use one on a headband for running after dark.

Batteries: When the battery does need replacing, a common nine-volt can be found just about anywhere.

Origin: An American small business makes the product in Oregon using American-made and imported components.  The company and employees are taxpayers who contribute to the U.S. economy.

It’s very rare that I can’t come up with some nit-picky, insignificant product problem that is based on my personal preferences. So here we go: The Pak-Lite doesn’t appear to be waterproof. That is easily fixed, though, by putting the light in a small, seal-able plastic bag. I can use mine even when it is sealed inside the bag, though the beam might get somewhat diffused through the plastic.

Pak-Lites come in a variety of cap colors and LED bulb colors.  There are also accessories, which include a magnet, a Velcro strip, a lanyard, a battery holder clip, and a headband that holds up to three Pak-Lites.  More handy gadgets are coming.

The biggest endorsement I can give any preparedness product is to say that I would include it in my personal survival gear. I carry the Pak-Lite regularly, and I will be getting others. This light is a winner.