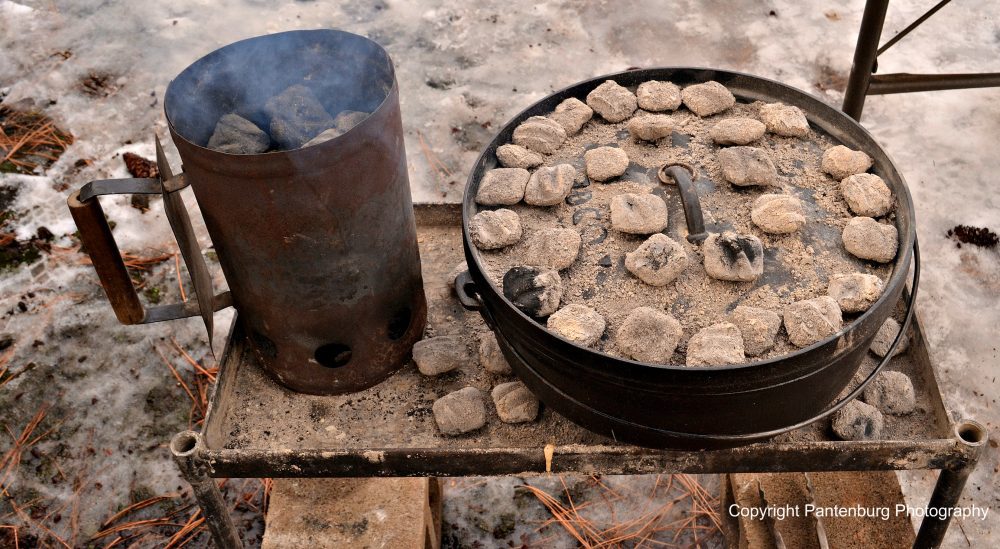 New to Dutch oven cooking? Want to wow the hunting camp/camping group/spouse for dinner? These recipes are (virtually) foolproof. 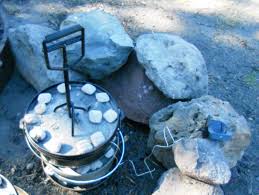 Dutch oven cooking doesn’t need to be challenging, and simple, easy recipes are best for beginners.

Dutch oven cooking can consist of gourmet meals that require several hours of food preparation and cooking and a chef to properly present it.

Or, you can use that cast iron to make a quick, delicious meal under a tarp in the rain.

My Dutch oven experience goes toward the latter. Here are three recipes that are virtually foolproof and they are tasty, easy to make and will have people coming back for more.

My brother Michael Pantenburg, hunting buddy Phil Walker, and I had just emerged from a several-day backpack elk hunt in the backcountry, and everybody was hungry.

So this recipe,  named “High Speed Venison”  because of its speedy preparation, was chosen.  Mike set up the stove and Dutch oven on the tailgate of my pickup; Phil sliced up some backstrap from a deer he’d killed, and I sliced onions. All this preparation took less than five minutes.

Ingredients for this dish go on every hunt. All you have to do is add venison (or any other favorite steak or meat), and you have a great, tasty meal that doesn’t require a lot of preparation. We’ve cooked this same dish in the parking lot of the motel in Orofino, Idaho; outside of a motel room in Lowell, Idaho, in the backcountry under a tarp in the rain and at home, when a quick meal was in order. 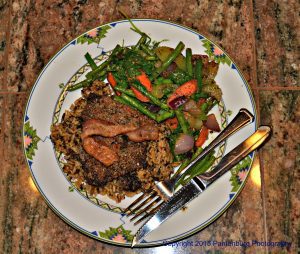 Venison steaks cooked in a Dutch oven can be incredible!

1 can cream of mushroom soup

I’m not sure where the name comes from, but it probably has nothing to do with the Revenant! This is a traditional breakfast at scout camp, when a busy day is planned and the guys will needs lots of energy. This is a particular favorite at winter snow camps, when a hot breakfast is really appreciated!

It is also an excellent choice for a beginner Dutch oven cook – nothing succeeds like success, and this is a real confidence builder. Variations of the recipe abound, and you can tweak the recipe to fit your personal tastes. This version, from 50 Campfires Magazine, is a great version of the old, classic recipe. 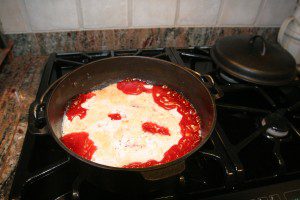 This three-ingredient cobbler is one new scouts start out with on their first campout. Anybody can make it, and it’s delicious.

My son and I made a similar cobbler on a canoe trip in the Boundary Waters, using fresh blueberries we picked from an island on a lake. Instead of a cake mix, we used a Bisquick batter. The cobbler was incredible, as is the memory.

A scoop of vanilla ice cream on the warm cobbler makes this dish decadent and probably sinful.

1 can of your favorite fruit pie filling

1 cake mix – you can use anything

Pour the pie filling in the bottom of a 10-inch Dutch oven. Pour the dry cake mix on top, spreading it out evenly. Put pats of butter on top of the cake mix.

Bake at 350 degrees about 20 minutes, or until the bottom bubbles up through the cake mix and melts the butter.