One of the pervasive folk legends about finding directions  in the wilderness or woods, is that moss grows on a certain side of a tree or rock. Just find your way by observing where the moss is,  according to this theory, and you won’t get lost. 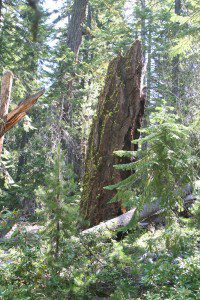 According to my compass, the moss was on the west side of this stump. (Leon Pantenburg photos)

Subsequently, this survival tip will help you to find your way in a forest. Here’s one opinion about that: finding directions with moss

But the newspaper guy in me had to ask: What direction does the moss point? Is there a difference in the location of the forest and the way the moss points? What are the variations? Why? Where did this legend come from?

The basis for this directional moss idea may have come from general information about moss. Moss produces spores instead of seeds, and it needs a damp  environment to reproduce.  Moss spores don’t survive in dry areas.

The sun shines from the south in the northern hemisphere, so a tree’s north side is generally more shaded and damp.  It stands to reason that there would be more moss on the damp  – the north – side

The moss myth never got far with me. In the dense, deciduous forests of Mississippi where I used to hunt and ramble, I could never find any pattern for the moss. In any dense, thick forest – where the sun doesn’t penetrate as far – it seems like you’ll see mosses on all sides of the trees. In some of standing water swamp areas where I used to wader-hunt for ducks, the moss was everywhere. It sometimes varied because of the fluctuating water levels! 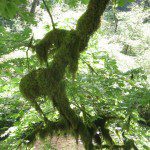 Moss grows everywhere in this temperate rain forest in Oregon.

As for rocks, well, mosses will grow on almost anything if conditions are favorable.  I suppose you might find more 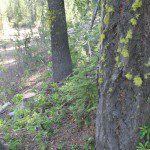 The moss on these trees at Camp Makulla was also on the west side!

moss on the north side of rocks in an open area, but in a shaded forest, chances are good that the rocks will be completely covered.

There are apparently so many variables about where and when moss grows in a forest  that a firm rule can’t be established.

In July, 2010, I was at Camp Makualla Boy Scout camp in the Cascades with some of the scouts from Troop 18 in Bend. There was a lull in the action, so I took my compass and camera and went walking. The idea was to check out this directional moss theory. (And, I love to ramble through the woods, and never need much of an excuse! )

I couldn’t find a consistent pattern anywhere. In one area, the moss grew on the west side of the trees, because there had been some timbering going on that let in more sunlight. A short distance away, the trees and underbrush were so dense that moss was everywhere. 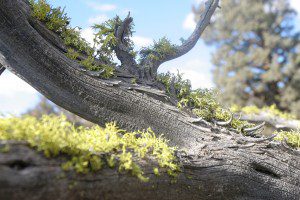 The lichen on this dead juniper tree in the desert grew on the top!

One of my requirements for a wilderness survival tip is consistency. The skill or technique must work every time, because there is no room for error when it comes to survival.

To me, the bottom line on the moss directional theory is this: Moss grows everywhere in the wilderness. There is not enough consistency, that I could find, to lend creditability to this “survival tip.”

Don’t depend on finding your way, based on directions gotten from the moss on trees. This idea is NOT something to promote or rely on.

Subsequently, I dub direction finding by observing  moss growth a myth. And I proclaim that myth busted!

Leon Pantenburg is a wilderness enthusiast, and doesn't claim to be a survival expert or expertise as a survivalist. As a newspaperman and journalist for three decades, covering search and rescue, sheriff's departments, floods, forest fires and other natural disasters and outdoor emergencies, Leon learned many people died unnecessarily or escaped miraculously from outdoor emergency situations when simple, common sense might have changed the outcome. Leon now teaches common sense techniques to the average person in order to avert potential disasters. His emphasis is on tried and tested, simple techniques of wilderness survival. Every technique, piece of equipment or skill recommended on this website has been thoroughly tested and researched. After graduating from Iowa State University, Leon completed a six-month, 2,552-mile solo Mississippi River canoe trip from the headwaters at Lake Itasca, Minn., to the Gulf of Mexico. His wilderness backpacking experience includes extended solos through Yellowstone’s backcountry; hiking the John Muir Trail in California, and numerous shorter trips along the Pacific Crest Trail. Other mountain backpacking trips include hikes through the Uintas in Utah; the Beartooths in Montana; the Sawtooths in Idaho; the Pryors, the Wind River Range, Tetons and Bighorns in Wyoming; Rocky Mountain National Park in Colorado, the Catskills in New York and Death Valley National Monument in southern California. Some of Leon's canoe trips include sojourns through the Okefenokee Swamp and National Wildlife Refuge in Georgia, the Big Black River swamp in Mississippi and the Boundary Waters canoe area in northern Minnesota and numerous small river trips in the Midwest and Pacific Northwest. Leon is also an avid fisherman and an elk, deer, upland game and waterfowl hunter. Since 1991, Leon has been an assistant scoutmaster with Boy Scout Troop 18 in Bend, and is a scoutmaster wilderness skills trainer for the Boy Scouts’ Fremont District. Leon earned a second degree black belt in Taekwondo, and competed in his last tournament (sparring and form) at age 49. He is an enthusiastic Bluegrass mandolin picker and fiddler and two-time finalist in the International Dutch Oven Society’s World Championships.